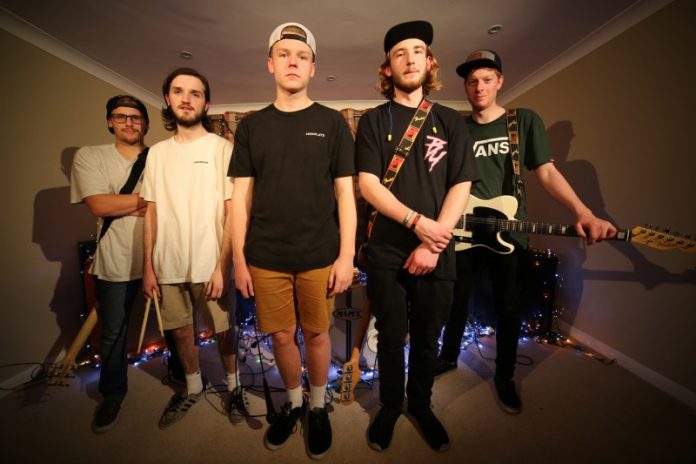 Their first song as a band is their new single

Anaesthetic is the first song we ever wrote as a band, and it’s the one that we all get stuck in our heads and sing in the shower” remarks guitarist Tim Bell of the posi-punk proposition Catch Fire, formed earlier this year from the ashes of local heroes Layby. The quintet have released the track, taken from their debut EP The Distance I Am From You, along with a video of live footage.

Released in February via Rude Records, The Distance I Am From You is a bouncy 4 track stonker. Bell declares enthusiastically: “We have a burning desire to write and play music. It’s really as simple as that. I don’t think any of us can see ourselves doing anything other than this.” The good news is, with their E.P boasting bangers as infectious as lead single and future floor filler, ‘Bad Behaviour’, and the soaring, emo-tinged ‘Anaesthetic’, it’s not likely that the lads of Catch Fire (rounded off by vocalist Miles Kent, guitarist/ vocalist Neal Arkley, drummer Ash Wain and bassist Joseph Ryan Askew) will need to consider doing anything else, anytime soon.

The band are also making their mark on the touring circuit, with Anaesthetic being a set staple “it’s always our warm up song when we practice. It’s one of the most upbeat and relatable ones from the EP which make it fun to play live too”.
Catch them live at:
01.04.16- Manchester, Zoo
02.04.16- Wrexham, Rewind
03.04.16- Sheffield, The hop
04.04.16- Birmingham, Wagon & Horses

Catch Fire ‘The Distance I Am From You’ Track Listing: