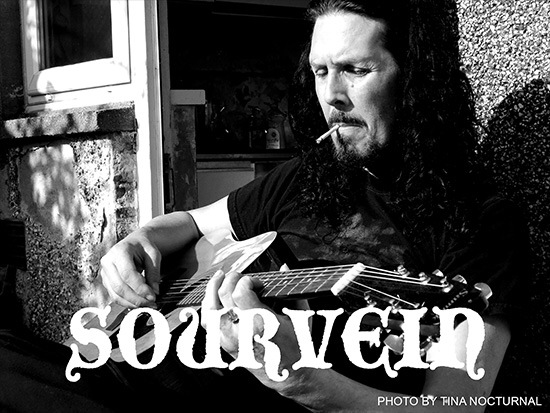 ….And they’ve got CoC man in to do it

SOURVEIN has existed through two decades of distortion, damage and relentless doom, their resin-coated carnage made of toxic riffs, grooves and just the right amount of psychedelic appeal. In properly commemorating the release as well as chronicling twenty often-times tumultuous years as a band, SOURVEIN mainman, Troy “T-Roy” Medlin, was recently interviewed by friend and fellow musician, Randy Blythe of Lamb Of God, who penned the band’s new biography. The text will serve as a thorough SOURVEIN introduction for the uninitiated.

“Finally, man. Finally,” T-Roy relays in an excerpt from the text. “It’s the record I wanted to make when I was in those rooming houses, but I couldn’t. There was too much pain, so I got lost for bit, falling back into the party life and trying to numb myself with alcohol. But motherfuckers need to feel the pain. There is more to life than numbing yourself.” Is that what Aquatic Occult will be about, bringing the pain? “I’m going to bring the truth. The lyrics are reality to me; I don’t write about cars or chicks or fucking horror movies, I write about getting my nose fucking broken, all the stuff I saw growing up and now. But I want it to be positive, to let people know that there is a way out of bad times and tough situations. I’m living proof.”