Cannibal Corpse Are Squids In 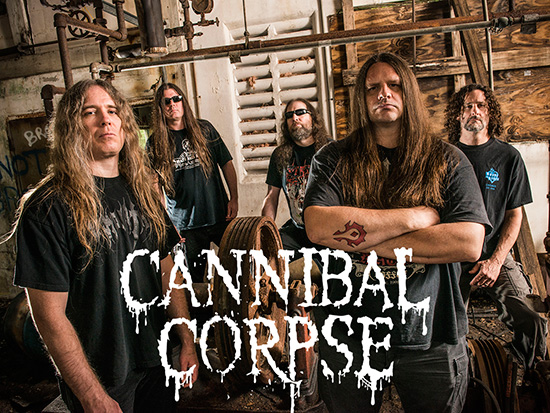 For the Halloween episode of Squidbillies (entitled “Squash B’Gosh”), CANNIBAL CORPSE recorded a special theme song for the show, which aired on October 30th, 2016. Producer and Hate Eternalvocalist/guitarist Erik Rutan comments about the collaboration: “The producers of Squidbillies contacted Cannibal Corpse and asked them to record the theme song for their Halloween episode that just aired. I was fortunate enough to be able to record and mix it for them before I went on tour. Was two days of fun, total blast, enjoy!!! Happy Halloween!!!”

CANNIBAL CORPSE released their 13th studio album, ‘A Skeletal Domain‘, in 2014 via Metal Blade Records and debuted at #32 on Billboard’s Top 200 chart (the highest chart position in the band’s storied history)! Produced by Mark Lewis (The Black Dahlia Murder, DevilDriver) at Audio Hammer Studios in Florida, the record boasts twelve ravenous tracks of confrontational, meticulously-executed, ill-omened brutality as only CANNIBAL CORPSE can deliver. To preview and purchase ‘A Skeletal Domain‘, please visit: metalblade.com/cannibalcorpse