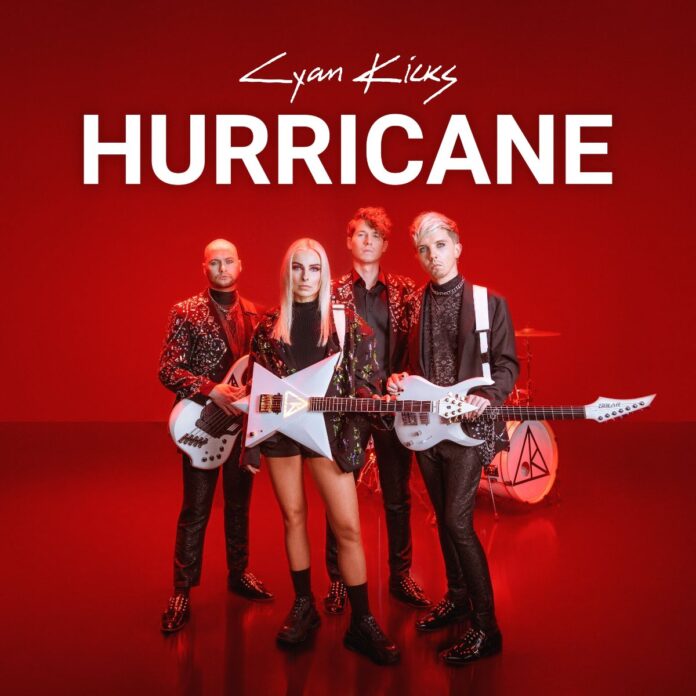 Helsinki-based rock band Cyan Kicks have released their brand new single ‘Hurricane’. It is available to stream on all platforms here with a lyric video featuring a performance from the band also out now here.

The song is a potent and empowering electronic rock track about overcoming fears and embracing the courage to be who you are and do the things you want to do.

The chorus features powerful chants of “shut up” and “give up” which include voices of their fans selected via social media.

‘Hurricane’ has been produced by Chris Walla (Death Cab For Cutie), and mixed by Zakk Cervini (Bring Me The Horizon, Machine Gun Kelly, Halsey, Limp Bizkit).

The track has been co-written with Elize Ryd, singer of the Swedish-Danish metal band Amaranthe, and has been informed by Elize’s own experience suffering from Lyme disease.

Regarding the song Cyan Kicks singer and guitarist Susanna Alexandra says, “When we got to the studio, Elize asked what we wanted to write. For a long time, we had wanted to write a song that conveys our willpower to push forward as a band and as individuals. It was the exact same theme that Elize had already been thinking about.

Continuing Elize says, “Being able to write music again after everything that I had gone through was important to me. That’s why this song will always have a special meaning for me.”

When Cyan Kicks songwriters Susanna and Niila Perkkiö (guitar) met with Elize they were all immediately on the same page about the theme they wanted to work on and the song was finished in one day.

Cyan Kicks are completed by Leevi Erkkilä (bass) and Pietari Reijonen (drums). Since their formation in 2016, the band have released two well received albums including their 2019 debut I Don’t Love You, which received a nomination for Best Rock Album at the revered Finnish music industry awards EMMA, followed by their latest album Not Your Kind in 2021 which achieved multi-million streams.

The next landmark moment in their impressive career is competing in Finland’s Eurovision selection process Contest For New Music (UMK). The event will take place at Logomo, Turku on February 26th and broadcast live across Finnish TV channels Yle TV1, Yle Areena and on Yle’s radio channels. The winner will be chosen jointly by viewers and an international UMK jury.
Download Press Photo Here
Credits: Yle / Nelli Kenttä, Milla Määttä