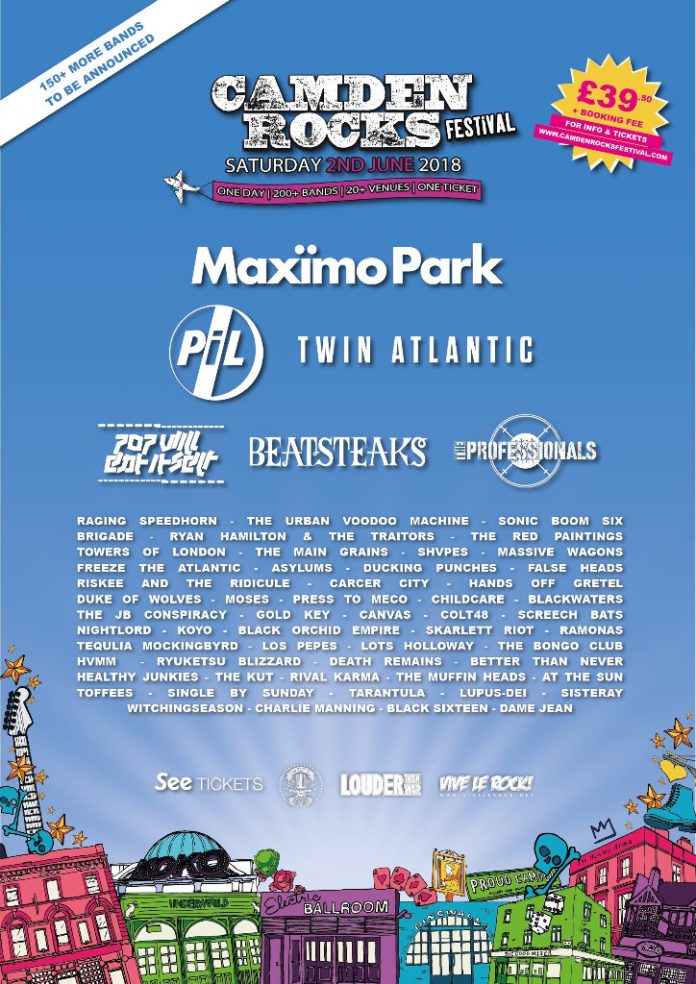 Following a sold-out sixth year in 2017, Camden Rocks Festival has today announced the first acts for the 2018 line-up and the acclaimed annual North London event is confirmed to take place this coming June 2nd.

Set to host over two hundred bands and artists in more than twenty of Camden Town’s revered venues, the festival will be headlined by Newcastle-Upon-Tyne based, Mercury-prize nominees Maxïmo Park, who will close the event at the prestigious Koko venue. With six albums under their belts, two of which went gold in the UK, their rousing indie rock anthems and anthemic choruses will provide the perfect climax to the days rock n roll thrills.

“Now I got a reason, ANY REASON, NIGHT OR DAY, DOING THE CAMDEN WALK,” stated frontman John Lydon when asked to comment on the event.

“I’ve been trying to book Public Image Limited (PiL) for years so it’s great to finally have them playing Camden Rocks this year,” enthuses event organiser Chris McCormack. “John Lydon and the Sex Pistols are the reason i got into music, easily the biggest influence personally and i’m sure for a lot of bands playing the festival. Public Image Limited (PiL) at the Electric Ballroom on their 40th anniversary is going to be incredible.”

“As always, the festival is as much about the emerging talent out there as it is the more established bands so get down early to catch some of these great new artists before they go supernova.”

“I’m also super excited about having Beatsteaks over from Germany,” continues McCormack.  “They’re a fantastic live band. Not many people know them in the UK which is crazy but hopefully we can help change that.”

From buzzing new bands starting out, rubbing shoulders with established rock giants, Camden Rocks has always prided itself on providing a platform for new talent. These join an ever-growing rank of bands being added to a line-up that covers every style across the many indie, rock, metal and punk genres. Other acts confirmed to play include:

And this is just the start. Stay tuned for more announcements and information. Camden Rocks 2018 already looks set to be another explosive event across the hallowed rock n’roll streets of Camden. As John Lydon says, come and “do the Camden walk…”

Full festival line-up, tickets and festival information can be found at:
www.camdenrocksfestival.com

General sale tickets are priced at £39.50 (subject to booking fee) and give festival goers access to all 200+ bands and 20+ venues on the festival.

Aftershow tickets are priced at £10 (subject to booking fee) and give festival goers access to the aftershow at KOKO 11pm – 3am.