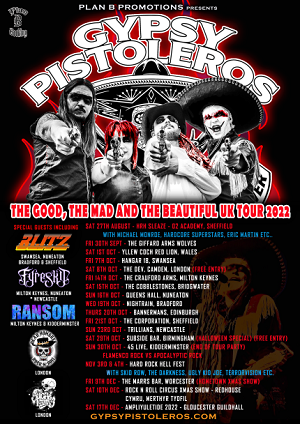 The new material promises to be an edgier, punkier and heavier side of Gypsy Pistoleros, whilst retaining the Flamenco Rumba heart and fully embracing their fiery flamenco/rumba passion, with their distinctive crossover of punk rock ‘n’ roll leanings!

They then begin a U.K headline ‘The Good, The Mad & The Beautiful 2022 Tour’ throughout October to accompany the single release.
Guests include BLITZ, Fyresky, ransom, The Suicide Notes & Dead Hombres
Tickets – http://www.gypsypistoleros.com/gigs.html
They are also on the Hard Rock Hell Festival, Great Yarmouth bill on November 3rd & 4th performing on the main stage alongside Skid Row, The Darkness & Ugly Kid Joe.