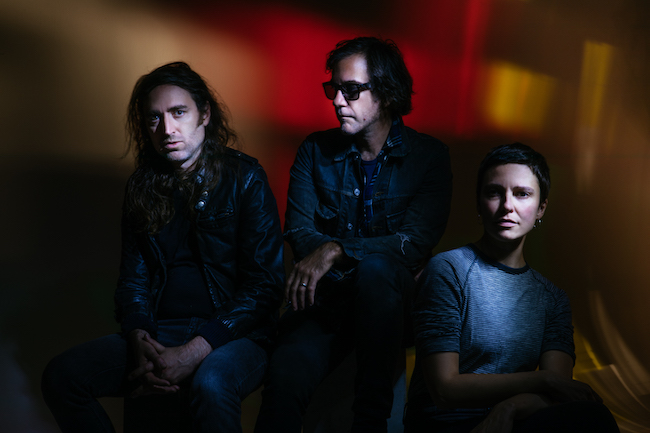 A Place To Bury Strangers have shared ‘I’m Hurt’, the newest single from their anticipated sixth studio album, ‘See Through You’, out February 4th (digital) and March 11th (vinyl) on Dedstrange. Following previous singles ‘Let’s See Each Other’ and ‘Hold On Tight’, the post-punk legends dive headfirst into suffering on today’s dark and explosive ‘I’m Hurt’.

The accompanying video, directed by Chad Crawford Kinkle (Dementer, Jug Face), is the first in a series of ‘See Through You’ videos from horror movie directors hand-selected by A Place To Bury Strangers. Under Kinkle’s frantic and hallucinatory direction, Oliver Ackermann’s expression of relentless liminal terror is transubstantiated into a brutal backwater blood feast. While the flickering, kinetic visuals will be familiar to anyone who has seen the band live, the psychological horror at the heart of ‘I’m Hurt’ is raw. Together, Kinkle and APTBS scramble our collective unconsciousness with scenes of grotesque public freakouts from the outskirts of the subliminal that are tied to a scorned woman’s black magic ritual which conjures up teenage demons on the hunt for revenge.

“‘I’m Hurt’ is the sound of friendship dying. At the time of writing this song, I was going out of my mind dwelling on conflict in my head and beating myself down while trying to rebuild my faith in humanity which is reflected in the actual structure of the song. The drums build with this frustration and a desire to scream with no voice. Listen closely to the vocal phrasing of ‘I’m Hurt’ in the chorus and you can hear the self-doubt and failure I was experiencing at the time,” says Ackermann.

A Place To Bury Stranger’s Oliver Ackermann always brings surprises. The singer and guitarist has been delighting and astonishing audiences for close to two decades, combining post-punk, noise-rock, shoegaze, psychedelia, and avant-garde music in startling and unexpected ways. As the founder of Death By Audio, creator of signal-scrambling stompboxes and visionary instrument effects, he’s exported that excitement and invention to other artists who plug into his gear and blow minds. In concert, A Place To Bury Strangers is nothing short of astounding — a shamanistic experience that bathes listeners in glorious sound, crazed left turns, transcendent vibrations, real-time experiments, brilliant breakthroughs.

And just as many of his peers in the New York City underground seem to be slowing down, Ackermann’s creativity is accelerating. He’s launched his own label – Dedstrange – dedicated to advancing the work of sonic renegades worldwide. He’s also refreshed the group’s line-up, adding Ceremony East Coast’s John Fedowitz on bass and Sandra Fedowitz on drums. Ackermann and John Fedowitz are childhood friends who played together in the legendary Skywave, and the band has never sounded more current, more courageous, or more accessible. 2021’s Hologram EP was the first release from the new line-up – and the first on Dedstrange – and the reaction was ecstatic, with Pitchfork saying that Ackermann had “transcended his gearhead tendencies, gracefully navigating fuzz and feedback loops as well as melodies and hooks”. ‘See-Through You’ pushes things even further. Simply put, it’s an epic, instant classic.

‘SEE THROUGH YOU’ TRACKLISTING