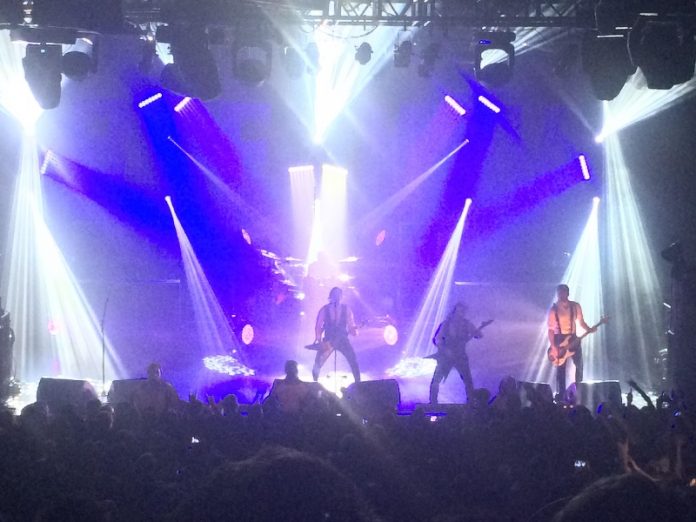 Adam Dutkiewicz just gotta know: “do you like partying, Birmingham?” he yells. It turns out they do. “Do you like metal music?” he enquires. Yeah, come on Adam, we invented it. Next question. To be fair Birmingham is less clear on it answer here. “Do you like American’s with tiny penises?” Let me get back to you on that one, Ad. Killswitch Engage just appear happy to be here, invigorated even. Perhaps with the pressure off and not headlining for once, they can really let their hair down and just go for it, That essentially is what they do for 50 glorious minutes. Songs which range from the anthemic to the crushing, are actually at their best when they do both, but from the first riff of “Alone I Stand” to the last note of “Strength Of My Mind” Killswitch are basically on a victory lap. Some moments of genuine heaviness – “Hate By Sign” is a case in point – and some real crowd pleasers, such as “A Bid Farewell”, turned into a communal singalong here, make for a set that is more uplifting than you might imagine. With enough twin guitar to carry the baton from old metal to modern,and with Jesse Leach acting as ringmaster to the chaos, Killswitch Engage are quite the sight tonight.

So that’s the support, the headliners must be worried right? Well not when they’ve been on the road for 18 months – if they aren’t at the top of the games now they are never going to be are they?

Bullet For My Valentine have precisely four shows left, and a couple of them are celebratory run through’s their debut “The Poison”, this isn’t one. That’s tomorrow. Tonight is about greatest hits set and 2000 people going apeshit for 90 minutes.

Putting aside the thought that “The Poison” has no right to be 11 years old, it does seem that BFMV are finally getting the credit they deserve. Lest we forget, they remain the only British Metal band born after Iron Maiden’s debut came out to have played arenas – and although thProu is is a step down in size from those days, this is sold out and tomorrow nearly is.

The show is an arena one in all but name too. The lighting is lavish, but as it’s all from behind and picked out with vari-lights you can barely see the band (although there’s just enough to see they are all wearing extremely sharp suits.

Greeted like heroes here, they kick off with “No Way Out” and at various points “Scream Aim Fire” raises the roof, “4 Words (To Choke Upon)” is simply just a wonderful song, and whoever dared take Birmingham on during “You Want A Battle?(Here’s A War)” is coming off second best.

Savvy enough too, to include songs that – as Matt Tuck admits – they wouldn’t necessarily want to play, but know the audience loves, like “Hearts Burst Into Fire”, BFMV are  a riotous thing in full flight.

The encore sees the energy level rise still further, as “Tears Don’t Fall” sees fists in the air, “Waking The Dragon” sees a moshpit break out and “Don’t Need You” sends everyone home happy.

Proud Welshman that they are, the house lights only go up after Tom Jones has warbled “Delilah” but although this might have been from Wales, Bullet For My Valentine moved into the wider world long ago. Tonight proved why.