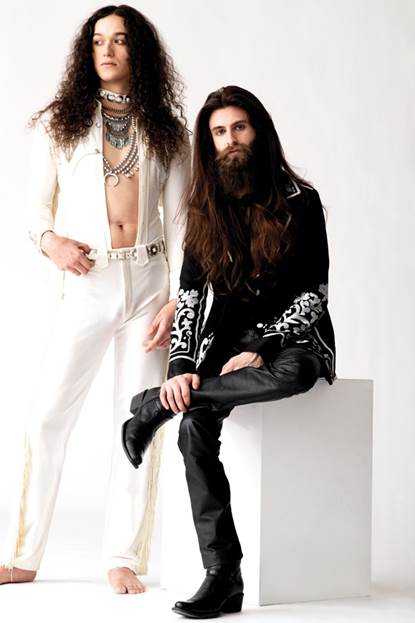 Crown Lands recorded this project with Grammy Award-winning, Toronto producer David Bottrill (Tool, Mastodon, Rush, Peter Gabriel). In speaking about “Inner Light,” the band explain their process, “the first Crown Lands instrumental but not the last. We wrote this with ‘80s King Crimson in mind. We wanted to see how far we could push ourselves as arrangers: this tune incorporates 12 string acoustics, tablas, and taurus pedals to great effect. This tune explores more complex metre than any other Crown Lands tune. The main theme is in 4/4 with a bar of 7/8 thrown in for good measure. The middle section alternates 15/8, 7/8, and 5/4 themes because why not!”

Crown Lands also describe the evolution of the track “Witching Hour (electric witch),” describing “this song has gone through a long journey to arrive here. We wrote ‘The Witching Hour’ in our debut LP sessions and reinterpreted it as an acoustic number for Wayward Flyers Vol I. After playing it live it felt that it needed an electric version. David Bottrill helped realize the vision with a re-arranged bridge that explores 7/8 and 11/8 riffs.”

“White Buffalo” which was released earlier this summer with “The Oracle,” is the third instalment of a trilogy of songs addressing Indigenous rights. The series of songs connect the past with “Mountain,” the present with ““End of the Road” while “White Buffalo” aspires to a prosperous future.

After a year of relentless releases, Crown Lands are finally returning to venues across Canada to do what they do best. “The Big Wave Tour” is the band’s first headlining tour with 13-dates across the country with Skye Wallace joining as support. The tour kicks off on October 15 at Pyramid Cabaret in Winnipeg, see the list of full tour dates below. Tickets are available now on Crown Lands’ website.