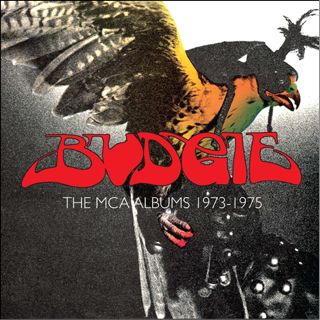 Boxset announced
On 3rd June UMC release The MCA Albums 1973-1975 boxset from the seminal British hard rock powerhouse Budgie.
Often thought of as a cross between Black Sabbath and Rush, the underappreciated outfit has influenced countless acts, despite enduring countless line-up shifts throughout their history.
The group originally formed in 1967 in Cardiff, Wales, comprised of members Burke Shelley (vocals, bass), Tony Bourge (guitar), and Ray Phillips (drums), and by the early ’70s they’d inked a deal with MCA Records.
This early lineup remains Budgie’s most definitive, due to the fact that it spawned three of the group’s finest albums — 1971’s self-titled debut, 1972’s Squawk and 1973’s Never Turn Your Back On A Friend — while the group’s quirky song titles became somewhat of a trademark for the trio (such ditties as “Nude Disintegrating Parachutist Woman,” “Hot as a Docker’s Armpit,” “In the Grip of a Tyrefitter’s Hand,” and “You’re the Biggest Thing Since Powdered Milk”).
Despite building a sizeable following in their homeland (while never breaking out of cult status stateside), Phillips left the group prior to their fourth album, 1974’s In For the Kill!, replaced by newcomer Pete Boot, which would in turn set off a flurry of steady lineup changes over the years for the group (the only constant Budgie member from the beginning was Shelley). Further releases were issued throughout the ’70s, including 1975’s Bandolier.
Shelley and company would remain together for a few more years before splitting up quietly by the mid-’80s, But almost as soon as they disbanded, several high-profile groups began covering Budgie classics, including Metallica (Crash Course in Brain Surgery and Breadfan), Iron Maiden (I Can’t See My Feelings), while back in their early club days Van Halen was known to cover the title track from In For The Kill!
Here is Budgie performing the legendary Breadfan https://www.youtube.com/watch?v=54H3EUAzpVg
This 3-CD compilation contains their 3 classic albums that were recorded for MCA and are regarded as classics of the genre – the albums have been re-mastered from original tapes (for the first time). More than an overnight success, these Budgie albums are now part of the folklore of rock and metal.
The booklet contains a new essay by Classic Rocks Malcolm Dome and contains photos and information from the era. This set provides a great starting on point for anyone interested in the band.
To preorder Budgie’s The MCA Albums 1973-1975 go to https://Budgie.lnk.to/MCA_Albums
The MCA Albums 1973-1975 track listing
Disc One
Never Turn Your Back On A Friend
1. Breadfan.
2.       Baby Please Don’t Go.
3.       You Know I’ll Always Love You.
4.       You’re The Biggest Thing Since Powdered Milk.
5.       In The Grip Of A Tyrefitter’s Hand.
6.       Riding My Nightmare.
7.       Parents.
Disc Two
In For The Kill
1.       In For The Kill.
2.       Crash Course In Brain Surgery.
3.       Wondering What Everyone Knows.
4.       Zoom Club.
5.       Hammer And Tongs.
6.       Running From My Soul.
7.       Living On Your Own.
Disc Three
Bandolier
1.       Breaking All The House Rules And Learning All The House Rules.
2.       Slipaway.
3.       Who Do You Want For Your Love?
4.       I Can’t See My Feelings.
5.       I Ain’t No Mountain.
6.       Napolean Bona-Part One.
7.       Napolean Bona-Part Two.
http://www.budgie.uk.com/