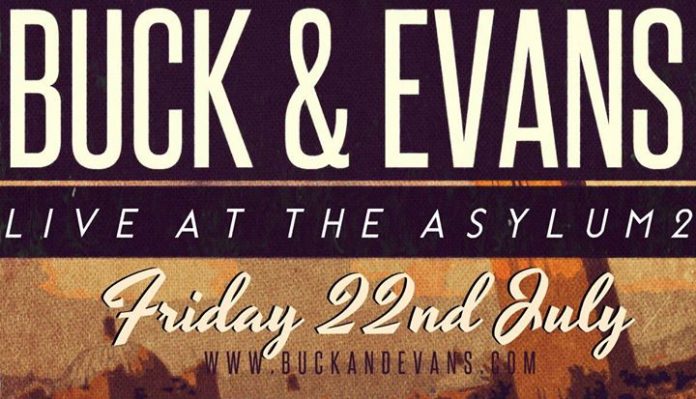 Daleks, forgetting your chair and great music. All in a night’s work for the “nerdiest band in rock”

“Sorry about the ropey support act” deadpans Chris Buck as Buck And Evans take to the stage for their electric set. “They told us they were a Spandau Ballet tribute band……”

Either because they are talented enough to sing their songs in any way they damn well choose (the truth) or that “we are too tight to pay a support” (what they claim), Buck And Evans have chosen to open for themselves here with what was set to be an acoustic set.

Set to be being the operative phrase given that it takes only the opening version of “Screaming” to see Buck strap on his electric, but whatever, both the interpretations of their own back catalogue – early material like “Treat Me Right” is stunning in this format – or the smattering of new songs they play like “Wouldn’t Change You” are superb. Ending the short set with a take on Freddie King’s “Going Down” is tremendous fun and shows another side to them.

Sally-Anne Evans has a Janis Joplin type wail, and her absolutely flawless performance propels songs like “Slow Train” to some other level where it sounds like they are filling arenas in a parallel universe.

It might be a wet night in a scruffy arsed part of Birmingham, but B&E provide a little slice of Californian style sunshine to the second city, with the laid-back blues of “Going Home”, while the one cover of the main set, a run through Otis Redding’s “Dreams To Remember” allows Buck to cut loose on his guitar.

It is though, about more than just the songs. There is a warmth amongst the band that permeates the show. So it is we learn that Chris forgot to pack Sally-Anne’s stool, and also discover Bob has Daleks in his garden, “I’m in the nerdiest band going,” laughs the guitarist. This laid-back attitude means curveballs are thrown into the setlist – a brilliant rocking “Screaming” means that appears in both parts – and there is a rare camaraderie throughout, including a jam on Van Halen’s “Hot For Teacher” just for fun.

They are all deadly serious about the songs, though. “Impossible” soars, “Fix You” slinks and there are some brand-new cuts chucked in, one with a catchy “Walking In The Rain” hook line in particular impressive.

There has been enough to suggest that Buck And Evans might have something approaching a winning formula for a long time, and they add in “Sinking” as a gentle reminder before the close. They end with one that isn’t so much a reminder as a full-on statement of intent. “Ain’t No Moonlight” was good before, somehow it sounds even better here and is enough to make clear that Buck And Evans deserve so much more.

After two hours in their company here it is impossible not to be convinced that it is a case of when not if that breakthrough comes.