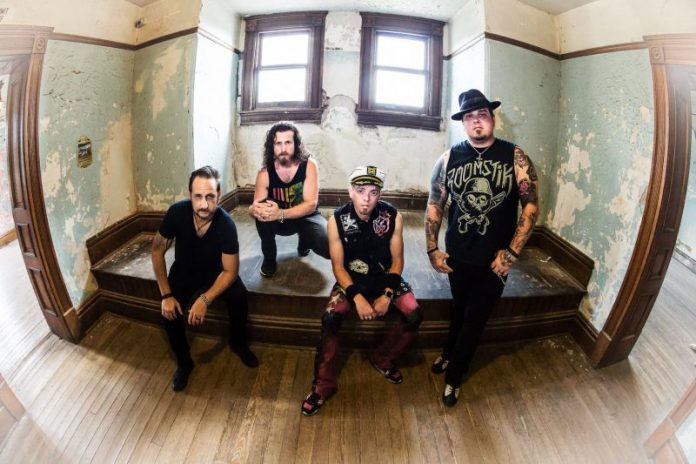 Kentucky rockers Black Stone Cherry are thrilled to announce the release of their long time coming blues EP, ‘Black to Blues’ which is out on Mascot Records/Mascot Label Group on 29th September.

Mascot Label Group is home to some of the finest blues icons of their generation such as Joe Bonamassa, Beth Hart, Walter Trout, Kenny Wayne Shepherd, Eric Gales, Jonny Lang, Robben Ford, Bernie Marsden, Ronnie Baker Brooks, Sonny Landreth and more, it seemed the perfect time to release ‘Black to Blues’. “I know it’s crazy for four rock n’ roll dudes to make a blues EP, but it’s us sharing with everyone the music that’s been our DNA from day one,” Black Stone Cherry vocalist and guitarist Chris Robertson says. “Blues is the music we listen to when we sit around on the bus with a bottle of bourbon.”

Before their five critically acclaimed albums, the 12,000-cap arena shows, topping the UK charts, and sharing the stage with superstars like Def Leppard, Lynyrd Skynyrd, Bad Company, Alter Bridge,and of a Shinedown, the guys in the Kentucky-based active rock powerhouse were just teenagers finding their way jamming on the blues. On the heels of their well-received ‘Kentucky’ album, the quartet issues the masterful 6-song EP, ‘Black To Blues’, a collection of blues classics and obscurities reimagined with the meaty moxie of classic BSC.  “A defining moment for me was realizing all the rock n’ roll that I loved came from the blues,” Chris says.

As a lead vocalist, Chris honed his burly pipes studying the power of the Texas Tornado himself, Freddie King, who they cover on ‘Black to Blues’ and, throughout their career, the group has always sprinkled in a few blues evergreens in their live set.  “The blues is such honest music. When you hear it, it’s like ‘I’m down on my luck, and, damn, that guy gets just how I feel.'” Chris shares. “I hope by sharing this music we have the beautiful opportunity to expose a new generation to the blues.”

‘Black To Blues’ pays homage to the fertile 1960s era of electric blues where the masters pushed boundaries with experimentation and volume. The EP includes covers by Howlin’ Wolf, Muddy Waters, Freddie King, and Albert King. The album was recorded in a burst of fevered inspiration this past spring at David Barrick’s Barrick Recording, the same studio where the band recorded their recent album‘Kentucky.’ Self produced, tracked the music in two days, and favoured a raw, in-the-moment production aesthetic to capture the inspired sessions. Chris adds: “Our approach was to do these songs as we’ve written them, with attitude and heavy guitar.”

Black To Blues opens with the Howlin’ Wolf classic ‘Built For Comfort.’ Here, they harnesses the song’s dark energy with foot-stomping burly riffage, impassioned whiskey and honey vocals, and a peaks and valleys arrangement that features virtuosic bursts of bluesy guitar brilliance, smoky quiet passages, and mountains crashing down climaxes.  Throughout the EP, the imaginative arrangements, soulful vocals, and subtle band interplay evoke the halcyon days of heavy blues acts such as Free and Peter Green’s Fleetwood Mac. On ‘Champagne & Reefer’ they mesmerise with deft slide guitar playing and powerful contrasting haunting and hefty dynamics. Other standouts include a raucous version of Muddy Waters’ ‘I Want To Be Loved,’ complete with jaw-dropping blues-rock guitar solos, and a clever rendition of Freddie King’s ‘Palace Of King”, there they “moved one note to make it more dark,” Chris reveals.

The blues is always a sage teacher, and making the ‘Black To Blues’ EP was a transformative experience for Black Stone Cherry.  Chris says: “It was humbling and freeing at the same time. It reignited our passion for this music, and it will definitely have an effect on our next album.”