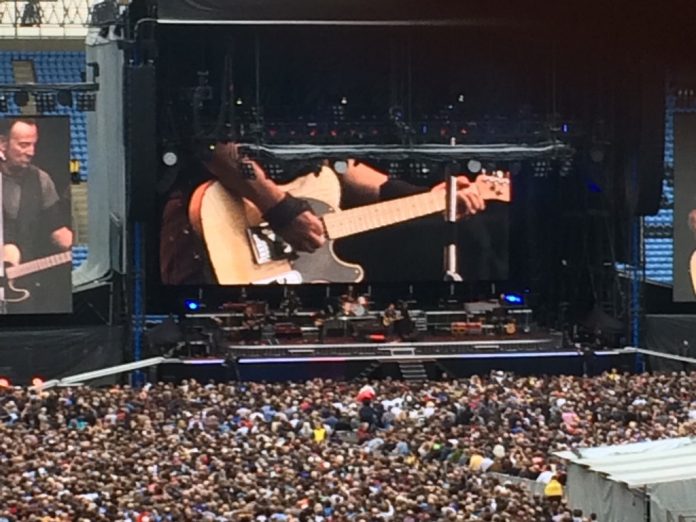 Tonight begins with Bruce Springsteen at a piano singing on his own to well over 30,000 people. It ends with him strumming his acoustic to the same crowd some three hours later. Both the songs he plays – “For You”, the former, and “Thunder Road” the latter – are well over 40 years old. It’s a fair bet that they are older than about a third of the crowd that pack this stadium (and most certainly older than the adorable kids that The Boss gets on stage to dance with him and various points and sing “Waiting On A Sunny Day”) but a neater symbol for the genius of the man – and yeah, that word is rightly used – you will not find.

For, while its trite to say that no one can move a crowd like Springsteen (the fact is that any act that gets this big has songs that connect with its audience on an emotional level beyond getting them from point A to Point B in their cars)  it would also be wrong to suggest those bookend songs represent the show as a whole. They do, in so much as they are brilliant, but the three hours in-between are quite simply the most fantastically bombastic rock n roll that you are ever going to see.

Originally slated as The River tour, this run of gigs was supposed to see the tour de force album played in full. Such an idea has now been shelved. Rightly so too, restrictions are not what Bruce Springsteen and The E St Band were ever about. This is a band that always seem happier they are winging it, and such a plethora of material doesn’t lend itself to the same songs every night.

That’s why tonight veers from the ones that your nan knows like “Born In The USA” and “Dancing In The Dark” (although such is the genuine brilliance of the lyrics of those that their meanings are hidden behind some thunderous rock licks) to a song like “Save My Love”, an outtake from the “Darkness On The Edge Of Town” record, that is requested by an audience sign.

That request element of the show is vital. Firstly because it’s fun (and one of these days this member of MV will be there when “Rosalita (Come Out Tonight)” and “Tunnel Of Love” are played as a result) but as with so much Springsteen does it masks a deeper truth. He understands better than most that the best concerts need to be personal, and maybe this is the only way he can retain that element on these enormous stages.

It helps, of course, that the band are in rare form. Nils Lofgren casually knocks out stunning solos on a rearrangement of “Youngstown” and “Because The Night”, Jake Clemons would make his uncle The Big Man, Clarence proud with his wonderful sax. Little Steven Van Zandt is still the partner in all kinds of crime and quite simply, the likes of “Darlington County”, “Prove It All Night” and”Badlands” are as good as it’s ever got, and when you add in work such as “Murder Incorporated” which is viscous and vitriolic and “Tenth Avenue Freeze Out” which serves as a tender tribute to Clemons and Danny Frederici is touching, the night covers all the emotions.

That perhaps indicates that there’s very little that could be considered “new” material – it’s not that type of show, this isn’t that type of place – but “The Rising” which was at least was released in this century, is magnificent.

Then there’s the delving into the history of rock n roll, and there is plenty of it. A glorious take on CCR’s “Travellin’ Band”, and a cheeky “Seven Days To Rock”, chief amongst them, but it’s “Shout” that Springsteen chooses to end the main show with, and there’s barely a person who isn’t grinning like an idiot and waving their hands above their heads as he screams “I’m just a prisoner of rock n roll” during it.

The man himself is essentially a force of nature. Close to his late 60s, The Boss – and there’s still something quite primal about the cries of “Bruuuccceee” that go up between songs – is relentless here for well over three hours. Amongst the great songs and the great lyrics, it could be perhaps forgotten that he’s perhaps the greatest frontman of them all, a rock n roll preacher, if you will, he can work a stage with consummate skill.

There’s a couple of lines in one of the songs they play here that sums up everything about the band and the man who fronts it. “No Surrender” suggests that “we learnt more from a three minute record than we ever learned in school.” But moreover it says: “Well, maybe we could cut someplace of our own with these drums and these guitars.” Across four decades – hell, across generations – the magic of this music has done that and more, and that is precisely why people still come to witness The E Street Band.