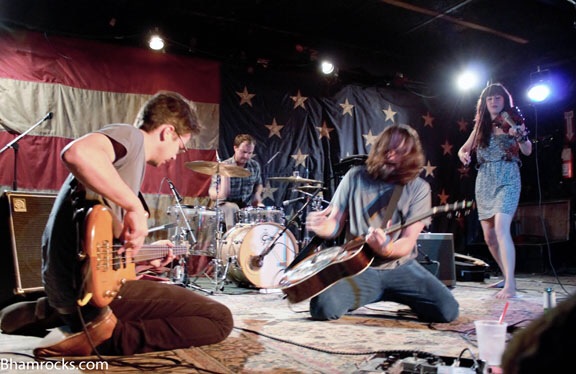 Brother Dege has just released his new Set It Off tour documentary. This 45-minute road movie documents the Cajun-born blues-psych-rock musician & his band The Brethren’s U.S. and European summer tours earlier this year.

Raw, uncut, nasty and real. From hood house parties to death metal festivals in Europe to Georgia dive bars, this road movie documents some true southerners ripping across the U.S. and Europe in a van… literally setting Dobros on fire from Paris to Memphis.

Shot by the band and fans, 80% of Set It Off was shot on cell phones with the footage archived on dropbox from motel wifi or emailed in from audience members.

As Dege admits, “I didn’t want to hire some fancy film crew to come follow us around and film us in RED HD or some shit and make us look and sound like a tame, well-rehearsed indie rock band. That shit is boring. I’m into the rough, unpredictable, unhinged side of rock & roll…where people cut loose, freak out, and fuck up, but capture an energy that can’t be quantified. Perfect performances are overrated. People have been conditioned to this gridded, TV star-maker side of performance that sucks the unprocessed life and edge out of bands. Set It Off is a love letter to our time in the van and the band together. It’s about the beauty of the journey and us sharing that with each other and the audience. In some ways, it’s not even about music.”