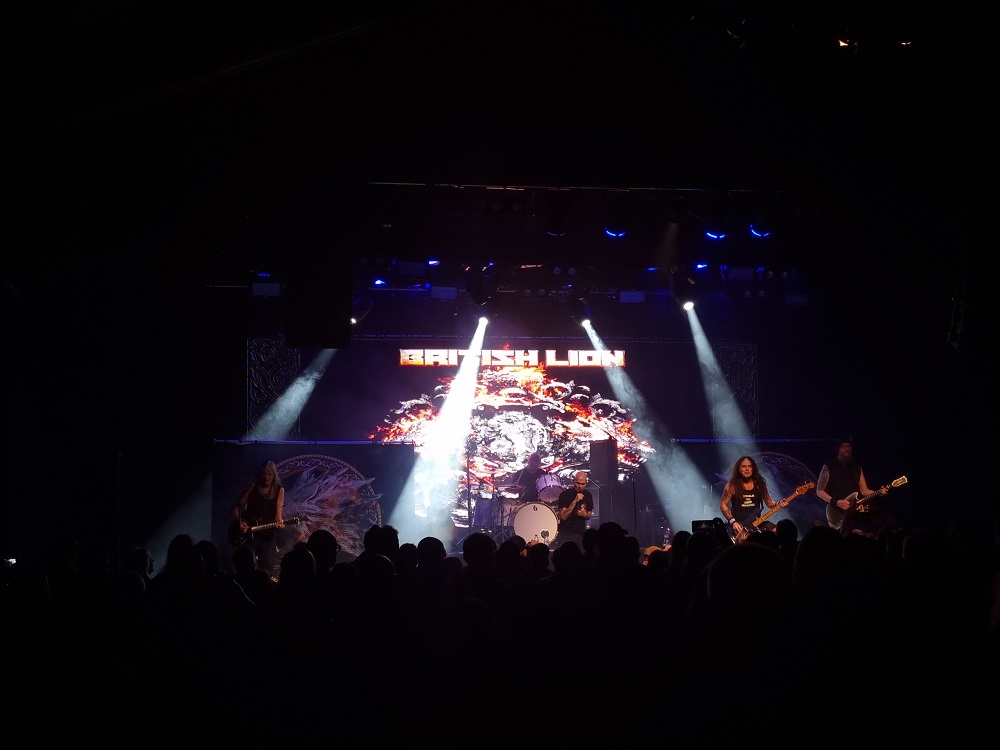 As the set draws to a close with “Eyes Of The Young”, you can’t help but think.

Not in a bad way, this has been superior hard rock and supremely catchy. Its expertly played, and the band – and it very much is a band – is having fun. Much like any other medium sized rock band in the UK so what’s the hassle?

Well, and apologies for the cliché, but honestly, there’s no way around this other than the obvious (as much as I usually try to avoid it). There’s a bloke with his bass guitar up in the air, enjoying himself as much as anyone in here. Standing there, with his trademark Whale Oil Beef Hooked t-shirt on.

He is the bass player in the greatest and best selling heavy metal band on the planet. He’s more than that, he’s their leader, their icon, and their major songwriter. He’s Steve Harris. And let’s be frank with each other here, he doesn’t have to be here. But my goodness he wants to be. And that’s the point. That’s the point of the whole show and its tour.

Somewhere, at sometime over the last ten years, British Lion became something more than something for Harris to do when Ed Force One was grounded. Their two albums are hard rock of top quality, and watching them tonight as they play nearly all of their tracks only re-enforces the idea that (probably because of the type of cliched thinking that was in my intro) that this is a really, truly underrated band.

“This is My God” from the debut, “City Of The Fallen Angels” from the second record and others are a mighty beginning, and you can’t help but watch Harris as he sings every word of the songs, as if he’s having the time of his life, and “Judas” kind of screams out the idea to everyone anyway.

The band – largely revolving around some Suffolk based rockers – deal with some dark themes, but the hard rock they play is from a different place than the words of “Father Lucifer”, say. “The Burning” shows the two guitarists Grant Leslie and David Hawkins at their very best.

Singer Robert Taylor, though is very much the focal point. He’s clearly living the dream. His dream. The way he speaks about hearing “Spit Fire” on the radio is genuinely lovely and he does “The Chosen Ones” with a real passion for the underdog. Maybe he feels like one, still? Whatever he does it so well, as he does on “Land Of The Perfect People”, albeit that one sees Leslie and Hawkins get their spotlight, and “Bible Black” is just a fine example of melodic and modern hard rock.

Whilst this is an excellently paced set – “Us Against The World” for one rockets by – what it doesn’t have is an encore. It fits them perfectly, given the whole ethos of this is that there’s no egos, no rock stars, just excellent songs.

The last two of them, “A World Without Heaven”, the very first song they ever wrote as a band, and the one where we started, “….Young” are highlights, and there’s a moment in the former where they lock into a small jam (nothing too long, this is all about a collective, not the individual) and you realise they could have been anything they wanted to be.

And that, essentially is the essence. British Lion are doing exactly what they want to. In the way they want to. Oddly, the fact that one of their members is so famous might well work against them in perception terms. This tour is only happening hastily after they pulled out of The Darkness UK trek, after all. Yet its clear to see after 90 minutes here, this is a band that actually deserves more limelight than they get.