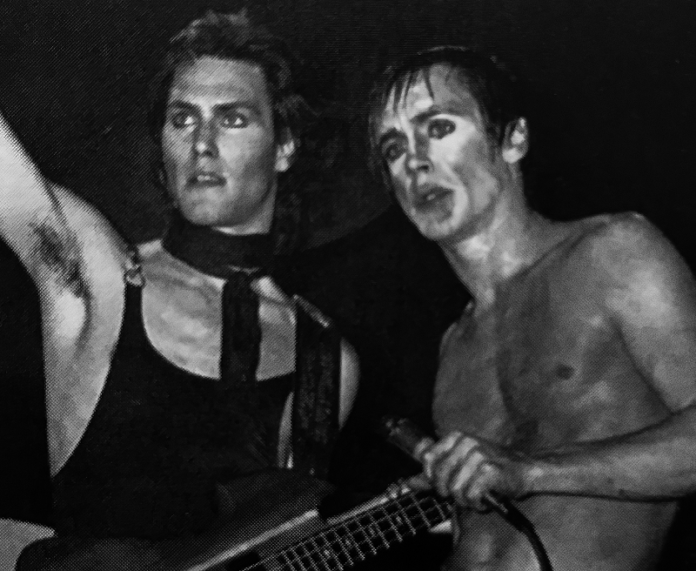 Tony Fox Sales will perform the Lust For Life album in full, as well as revisiting songs from across the individual band members’ careers with legendary artists such as Blondie and David Bowie. The eleven-date tour also includes a special one-off date in Dublin.

The full tour dates are as follows:

Announcing the tour, Tony Fox Sales comments: “I look forward, with great anticipation, to returning to England to tour this coming year. The Lust For Life album was the recording highlight of my fifty-eight year career in music for me. It was an amazing experience artistically, and personally. Memories not too soon forgotten. Though, as of now, I have not worked with the entire line-up of players for this tour, I have no doubt, that this will be an ass-kicking event! Lust For Life!”

Katie Puckrik: “I’m a show pony from way back: along with my broadcast career covering pop culture, I performed onstage with The Fall and Michael Clark Company, I toured the world dancing with Pet Shop Boys, and I sang in Sparks’ opera The Seduction of Ingmar Bergman, both on the original cast recording and in performance. I have worked with towering icons of music, but taking on the magnificent Iggy Pop’s vocal duties for this Lust for Life re-make/re-model is an electrifying opportunity like no other. Not only do I get to sing anthems like ‘Lust for Life’ and ‘The Passenger’ (as well as my personal fave from the album, ‘Success’), but I’m surrounded by some of Iggy, Bowie and Blondie’s key players, including Tony Sales, Clem Burke and Kevin Armstrong. So strap on your horse tails and join me in celebrating Lust for Life.”

Tony Fox Sales – Bass and Backing Vocals: Growing up in Detroit, bass-player, Tony Fox Sales, and his drummer brother, Hunt, formed their first band in the mid-1960s. As a rhythm section Tony and Hunt would go on to work with David Bowie, Iggy Pop, Todd Rundgren, Bob Welch, Andy Fraser and many others. After recording a couple of albums with Todd in the early 1970s, the two brothers recorded the Kill City album with Iggy Pop in 1975 followed by Lust for Life in 1977. They both joined Iggy on his subsequent tour, recorded as TV Eye Live 1977 and released the following year. In 1982 Tony joined Chequered Past, which included singer/actor Michael Des Barres (later of Power Station); ex-Sex Pistols guitarist, Steve Jones; Blondie’s drummer, Clem Burke, as well as their bass player, Nigel Harrison. In 1988 Tony then joined forces with David Bowie, Reeves Gabrels and Hunt Sales in Tin Machine. Bowie later acknowledged that it was Tony and Hunt’s contribution to Lust for Life that led him to invite the brothers to join him.

Clem Burke – Drums: Answering an ad in the New York newspaper, Village Voice, for a band seeking a ‘freak energy’ rock drummer, Clem Burke became the drummer of Blondie in the mid-1970s. The band recorded their first album in 1976 and emerged as the great pop icons of New York’s celebrated late 1970s new wave punk scene, achieving huge commercial success with the number one hit singles ‘Atomic’, ‘Heart of Glass’, ‘Sunday Girl’, ‘Call Me’, ‘Rapture’, and ‘The Tide is High’. When Blondie temporarily broke up in 1982, Burke joined Tony Fox Sales in Chequered Past and has also played with a plethora of music legends, including Bob Dylan, Pete Townshend, Iggy Pop, The Ramones, The Eurythmics and Joan Jett. In 2006, along with the other original members of Blondie, Clem was inducted into the prestigious Rock and Roll Hall of Fame, with Blondie already having sold over 42 million records.

Katie Puckrik – Vocals: The performer, broadcaster and writer made her TV breakthrough hosting The Word in the 1990s. As a vocalist she sang in Sparks’ opera The Seduction of Ingmar Bergman, and her presenting work includes a two-part BBC TV documentary on yacht rock, a four-part BBC radio series on power pop, and her ongoing role as a commentator on Channel 5’s popular Greatest Pop Songs/Videos franchise. Her modern history podcast We Didn’t Start the Fire, based on the Billy Joel hit, was named one of The Observer’s top ten podcasts of 2021. She still considers her favourite career achievement performing with Pet Shop Boys on ‘West End Girls’. “This sexy, sinister lullaby was my ‘I’ve made it!’ anthem when I scored my best job ever: dancing on Pet Shop Boys’ 1991 Performance world tour.”

Kevin Armstrong  – Guitar and Musical Director: Kevin began his musical life with his own band Local Heroes SW9. After two albums his career began thriving as a writer, producer, bandleader and guitarist. Most notably, Kevin met David Bowie in late 1984 and worked with him on various projects, including putting together his band and performing at the legendary Live Aid in 1985. Bowie introduced Kevin to Iggy Pop as guitarist on the 1986 album Blah Blah Blah and Kevin became Iggy’s bandleader in 86/87. He put together Iggy’s touring band again from 2014 until 2019. Kevin has worked with Morrissey, Grace Jones, Sinéad O’Connor, Prefab Sprout, Thomas Dolby, Transvision Vamp, Brian Eno, Paul McCartney, Sandie Shaw, Gil Evans, Alien Sex Fiend, Keziah Jones and many more.

Luis Correia – Guitar: Luis is a London-based guitarist, producer and songwriter. Originally from Portugal, where he started his career as a session player, Luis moved to the UK over a decade ago and has since performed alongside names like Earl Slick (David Bowie), Bernard Fowler (The Rolling Stones), Erdal Kizilcay (David Bowie), Martin Lister (Alphaville), amongst others. His musicality and soulful playing make Luis a sought after muso on the London scene, where he’s often seen with various bands. He’s currently working on his own music and preparing for a tour with Steve Norman of Spandau Ballet later this year.

Florence Sabeva – Keyboards: a London based pianist, film composer and singer-songwriter, Flo started her career as a session pianist and has played alongside artists like Tom Bailey, Earl Slick (David Bowie) and Bernard Fowler (The Rolling Stones) and currently tours with Heaven 17. Also a very active film composer, she wrote her first score for ‘Wax, We Are The X’ and was then commissioned to write the soundtrack for the Gravity Field Festival in Guildford and to score the German movie ‘Mireille and Angelique’. Flo released her first studio album ‘The London Sessions’ in 2017, featuring eclectic works with European songwriters and artists that reflect her various music influences.

Tom Wilcox – Curator and Producer: Tom was the front man of 90’s art punk band Maniac Squat finding notoriety with their 1995 ‘hit’ F**k Off (Single of the Week in Kerrang!). Tom has since produced albums for Gillian Glover and Lisa Ronson; the latter, co-produced with Paul Cuddeford, receiving a 4-star review in Mojo and widespread critical acclaim. As a music curator, Tom’s credits include Blondiefest, Princefest and Iggyfest at the ICA, as well as conceiving and introducing bands/tours such as Tony Visconti’s Holy Holy.