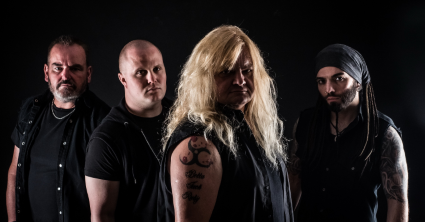 September release for first album for nearly 20 years
Dissonance Productions proudly announces the worldwide signing of Steve Grimmett’s GRIM REAPER.  The recently launched rock/metal label will release the band’s new album, Walking In The Shadows, on September 23.  It will be the band’s first new recording since 1987’s Rock You To Hell.  Pre-order information for the album’s standard and limited edition digipak formats will be announced shortly.
The release of Walking In The Shadows has been an anticipated announcement by fans of the British metal band for more than two decades.  Vocalist/band leader Steve Grimmett updated fans via a Facebook posting in early January noting, “2016 has started and that means only 29 days until I start touring again.  This year it’s Europe then North America, South America, plus a new album… bring it on!”  He continued in discussing the new album saying, “I am tremendously proud of the album.  It has taken a long time because it has been fraught with problems, but we have ended up with the best thing I have done in decades.  We’re all looking forward to bring it to the fans and excited to be doing a world tour, starting straight after its release, and carrying on until 2017.”
Surrounding himself with an all new band, Grimmett recently completed a 22-date North American tour.  The tour, including stops in New York, Philadelphia, Detroit, Chicago, Milwaukee, Seattle, Los Angeles, San Antonio, and Austin.  Due to its success, the band recently announced a planned return in the autumn to support the new album after release.
GRIM REAPER‘s story begins in 1979 after successfully fighting off hundreds of bands in a local Battle Of The Bands competition.  This win, combined with an already sizeable following, aroused the interest of Ebony Records.  Signing with the small UK label, GRIM REAPER released three albums in rapid succession to international acclaim.  Due to legal turmoil with Ebony, GRIM REAPER would disband in 1988.  Grimmett would go on to record with Onslaught, Lionsheart, and more recently The Sanity Days debut Evil Beyond Belief.  His renowned vocal range remains one of metal’s most identifiable with loyal fans turning out in numbers to hear him perform.
Since reforming in 2006, Steve Grimmett’s GRIM REAPER has made several European festival appearances including Germany’s Keep It True, England’s British Steel, Belgium’s Heavy Sound, and Sweden’s Muskelrock.