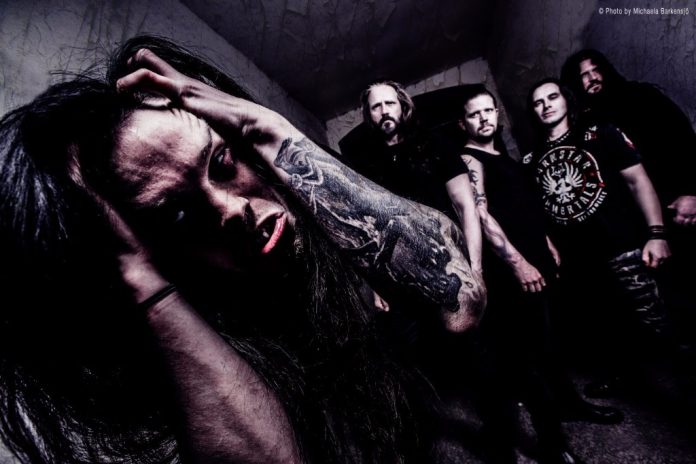 Sixth album due this week. Here’s a song

In light of the upcoming release date for their 6th album “In His Infernal Majesty’s Service” next week via Century Media Records, Swedish blackened Metallers WITCHERY are debuting another new song as digital single today.

Or listen to the single here:
Spotify: https://open.spotify.com/track/0ujRYh5qg8LYLAr43zThbk
iTunes: http://smarturl.it/OathBWitcheryiTunes

WITCHERY’s guitarist and band-leader Jensen commented as follows on “Oath Breaker”, the closing track on the new record: “This might be my favorite song of the whole album. Totally relentless in its thrashy-ness, yet beautiful and epic during the choruses. I can’t wait to get to play this song live! Lyrical topic: A fictional story about a secret society that protects is vows of secrecy.”

The album’s complete track-listing is as follows:

The album’s initial CD pressing comes as Digipak with 2 bonus tracks (“Eye For An Eye” and “Cloak And Dagger”, which are rare cuts from the “Witchkrieg” album sessions), as Gatefold LP on 180gr. vinyl (On black as well as limited runs of 100x white, 100x golden and 200x red vinyl colouring!) and also as Digital Download.

WITCHERY’s “In His Infernal Majesty’s Service” was produced and mixed by Daniel Bergstrand at Dug Out Studio (Behemoth, In Flames, Meshuggah) and comes packaged in classy artwork by Andreas Diaz Pettersson.