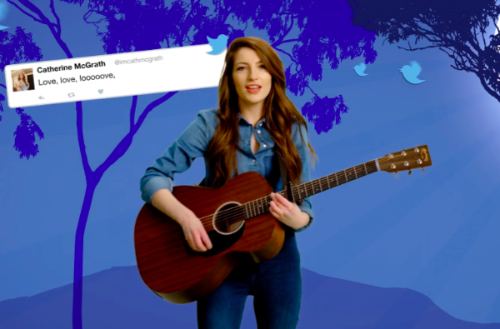 Following her hugely successful UK tour with The Shires and outstanding performances at this year’s Great Escape Festival, Catherine McGrath has released her new single ‘Never Wanna Fall in Love’.

It is her seventh consecutive ‘New Music Friday’ playlisted single and the final track to be taken from her upcoming EP Starting From Now, which is out tomorrow via Warner Music.

Catherine has also released a special video to accompany the track which is a colourful, short-but-sweet clip tailored for the social media platform Twitter.

It follows the acclaimed singles ‘Starting From Now’, ‘When I’m Older’ and ‘Just In Case’, all of which came with mini videos capturing the worlds of Instagram, YouTube and Facebook.

At just 19 years old Catherine McGrath is one of the hottest young talents of 2017 and after moving to London from her hometown of Northern Ireland she has taken the UK country-pop scene by storm following the release of her debut EP One in December last year.She has also made a huge impact on the live circuit, supporting the likes of Canaan Smith, Una Healy, Kelsea Ballerini and last month The Shires – including a night at the London Palladium which you can watch backstage footage from HERE.

Catherine is currently at the end of a UK and Irish tour with Picture This and will be back in London on June 29th to play at Music Week’s RADAR showcase at Under The Bridge before joining Tom Petty & The Heartbreakers and Stevie Nicks at British Summer Time, Hyde Park on July 9th.

After a hugely successful six months with two EP’s released and an abundance of live performances, Catherine is now writing and recording her debut album which will be announced via Warner Music soon.