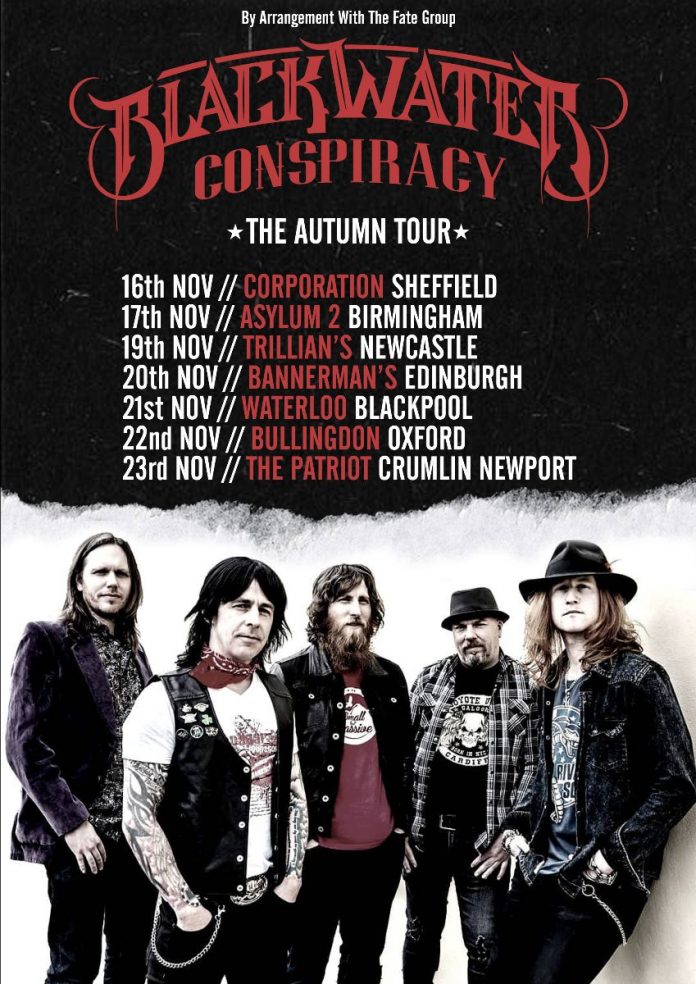 Blackwater Conspiracy release their second album ‘Two Tails & The Dirty Truth of Love & Revolution’ on 14 February 2020 on Bulletproof 20/20 Records, distributed by Absolute via Universal / Sony DADC. This record features eleven brand new tracks and is the follow up to their acclaimed debut “Shootin’ The Breeze”. The album was produced by James Wilson and Blackwater Conspiracy, and mixed by Josiah J Manning. Some of the new material will be played live for the first time on their seven date November tour!

‘Two Tails & The Dirty Truth of Love & Revolution’ is an ambitious album that shows just how far this band have come. Steeped in the traditions of Rock n Roll and Blues but blessed with its own clear identity, it builds on the significant success of the debut but marks a clear trajectory both musically and creatively. This is a band with something to say.

The reaction to the debut album propelled Blackwater Conspiracy to slots at Download, Ramblin Man and Steelhouse Festival and the band are about to embark on a November headline tour of the UK – with more dates coming around the release of the album in February 2020. The critical reaction to the band’s first album was incredible: Classic Rock made them ‘Ones To Watch’, Planet Rock magazine gave them a 4* review noting “this fledgling band already sound like they’ve come of age”, Powerplay made them ‘Album Of The Month’, further major interview support came from Fireworks and Hard Rock Hell.

Lead vocalist and rhythm guitarist Phil Conalane said: “We are very happy with new songs on the new album, we recorded it at home in N. Ireland at our own speed. The songs are a reflection of where we are in this journey , a snapshot. As always with BWC, the lyrics are authentic, real stories and observations. Its rock n roll done by Irishmen, no trends followed, no fads chased. We hope the BWC fans will love it as much as we do”

‘Two Tails & The Dirty Truth of Love & Revolution’ is the sound of a band who are already running with the big boys. The band have created their own unique blend of rock and roll. This album is packed with honesty, swagger and great songs; the next chapter of the Blackwater Conspiracy story is here, and it is as compelling as ever.
TRACKLISTING