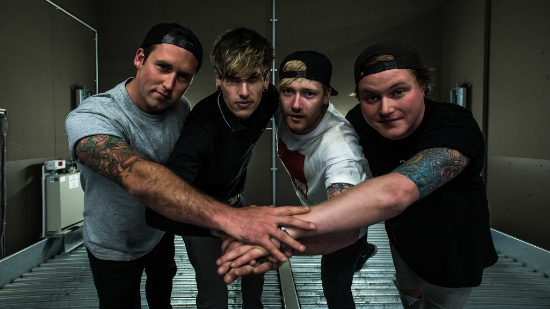 Skate punks show their gentle side

Bringing back old school skate punk, The Bottom Line have released their new single‘When I Come Around’, taken from their upcoming EP I Still Hate You out January 12th.

In true pop-punk style the London foursome are full of energy, but this time are showing a more reflective side with ‘When I Come Around’. It’s a stripped-bare acoustic sing along with a catchy chorus and Callum’s distinctive vocals taking centre stage.

‘When I Come Around’ follows the previously released mosh-pit anthem ‘Pull Me Out’, which has seen support from the likes of Kerrang! Radio’s Johnny Doom and was added to Team Rock’s playlist. The accompanying video is a montage of footage from their time on tour with Simple Plan last year, including live performances, crowd surfing, stage invasions and backstage antics.

Both tracks feature on their new EP I Still Hate You which is out next week. It is a dynamic and diverse record, with five tracks bursting with raucous vitality and infectious melodies that will get you hooked.

In support of I Still Hate You, the band will be back doing what they love, bringing their pop-punk madness to audiences across the UK for a headline tour this month. Starting at The Garage, Glasgow on the 9th they will be visiting six cities including a special EP launch show at London’s Camden Assembly on January 12th.
UK HEADLINE DATES January 2017
Monday 9th – The Garage (Attic), Glasgow
Tuesday 10th – Bodega, Nottingham
Wednesday 11th – Sound Control, Manchester
Thursday 12th –  Camden Assembly, London (EP Launch Show)
Friday 13th – The Exchange, Bristol
Sunday 15th –  Joiners, SouthamptonTickets available from thebottomlineuk.com