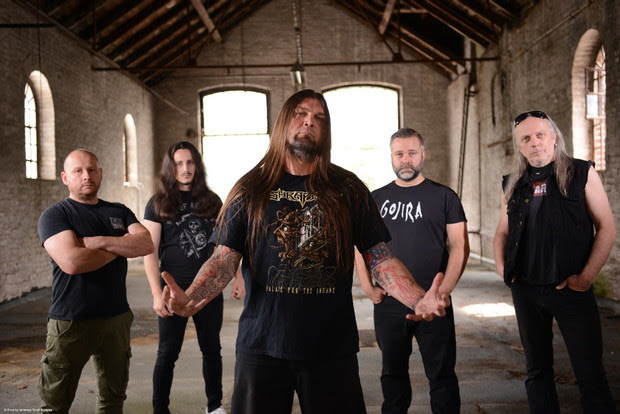 BONDED, the group by former Sodom members Bernd “Bernemann” Kost (Guitars) and Markus “Makka” Freiwald (Drums) alongside second guitarist Chris Tsitsis (ex-Suicidal Angels), bassist Marc Hauschild and vocalist Ingo Bajonczak (Assassin), have decided to stick to their guns and once again collaborated with producer Cornelius Rambadt (Sodom, Disbelief, Onkel Tom) at the Rambado Recording Studio in Essen, Germany and also had Björn Gooßes / Killustrations (Aborted, The Crown, Carnal Forge) create the album’s artwork (To be seen above!), just like on their critically acclaimed “Rest In Violence” debut album from 2020, which entered the official album charts in Germany at # 84.

A first single for “Into Blackness” has been released today and “Into The Blackness Of A Wartime Night” can be seen in a lyric clip designed by Cloud Music Typography here: https://youtu.be/zN3MERohx1s

BONDED checked in with the following comment about the track:

“We are happy and proud to present you a first song of the upcoming BONDED album “Into Blackness”. Entitled “Into The Blackness Of A Wartime Night”, this track contains all of the musical trademarks by BONDED at once: It’s riff-oriented, fast, with plenty of tempo changes and displaying a permanent contrast between brutality and melody. The intense lead guitar dueling and above all the memorable, powerful vocal lines make this a great representation of the new album. And this song could almost be understood as the album’s title track, as it is lyrically part of the 4-track war-themed storyline centerpiece inspired by the fictional book “The Division Of The Damned” by Richard Rhys Jones. We hope you enjoy this first foretaste of the album…and look out, as there is more coming your way soon!”

Here is the track-listing for BONDED’s upcoming album:

The album’s limited first-pressing CD edition will come with O-Card packaging, a sticker and two bonus tracks: 12. Humanity On Sale and 13. Will To Survive. “Into Blackness” will also be available as 180g black vinyl on the LP format and the album’s pre-sale in its various formats starts today from here: https://bonded.lnk.to/IntoBlacknessPR

BONDED line-up:
(From left to right on photo by Sebastian “Konz” Konopka)