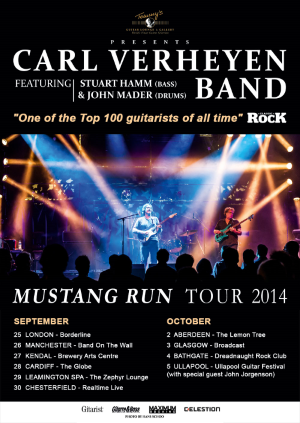 Verheyen, who has just released his cover of Supertramp’s “Bloody Well Right” is on a trek to support his new record, “Mustang Run” which has been receiving rave reviews.
Not least of which came from the aforementioned Bonamassa who said: “Every time I start to feel good about my playing and general overall knowledge of the guitar, I will get together with Carl Verheyen and see truly how far I have to go”
The more modest Verheyen commented: “I wanted to break free of the mould of ‘the Carl Verheyen Band’ and do a progressive instrumental album. I wanted the opportunity to weave thick textures of sound using dozens of instruments and tones. My motivation was the sheer joy of hearing those sounds in the air.”
The record features guest performances by Simon Phillips, Chad Wackerman, Jerry Goodman, Bill Evans,Jimmy Johnson, Stuart Hamm and Gregg Bissonette,  with Verheyen commenting: “On “Mustang Run” I wanted that inspiration to come from the rhythm section, so I called different bass players and drummers to suit the songs. I love to play with musicians that I have a deep musical relationship with, because the studio scene in LA breeds hundreds of casual musical relationships. The great players on Mustang Run are all friends that I’ve known and performed with for years.”
UK Tour 2014
25th Sept – LONDON – Borderline
26th Sept – MANCHESTER – Band On The Wall
27th Sept – KENDAL – Brewery Arts Centre
28th Sept – CARDIFF – The Globe
29th Sept – LEAMINGTON SPA – The Zephyr Lounge
30th Sept – CHESTERFIELD – Realtime Live
2nd Oct – ABERDEEN – The Lemon Tree
3rd Oct – GLASGOW – Broadcast
4th Oct – BATHGATE – Dreadnaught Rock Club
5th Oct – ULLAPOOL – Ullapool Guitar Festival (with special guest John Jorgenson) www.carlverheyenuktour.com