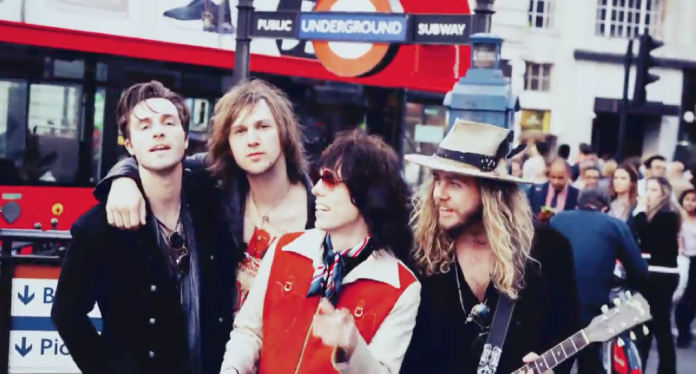 Acclaimed British rockers The Struts have shared the video for their latest single, ‘Body Talks’, which premiered with Billboard on Friday. The track is the first to be taken from their highly anticipated upcoming second album.

Featuring footage from their recent visit to the UK, which included a stunning sold-out show at London’s Koko, the video sees the band spreading their trademark glam swagger around London in classic style.

Frontman Luke Spiller said of the video, “It was great to see all of our fans, family and friends. A truly unforgettable experience and so many memories that we captured in our brand new video for ‘Body Talks’. Go check it out now! Hope to come back soon! Big love to the UK.”

Rapidly establishing themselves as one of the best live acts around, the video comes after a status-affirming main stage Download set and two blistering UK headline shows last month, which saw the band thrill fans with their electrifying live performance that has had music critics and big-named stars raving about them.

Dave Grohl recently claimed “…they’re the best opening band we’ve ever had. That kid Luke, the singer, it’s unbelievable. He’ll walk out in front of an audience in Tulsa, Oklahoma, where nobody has ever heard of them and by the end of the show he’ll have the entire audience in the palm of his hand.”

Fronted by Luke Spiller, with guitarist Adam Slack, bassist Jed Elliot and drummer Gethin Davies, The Struts are not to be missed, bringing glam showmanship and reckless swagger to modern rock & roll across the globe.

The band are now preparing to release the highly anticipated follow-up to their debut album. Speaking to Billboard, Spiller said of the release, “So, the debut album, Everybody Wants, was this really firm left hook, and this next album is going to be a knockout right hook punch. It’s a similar kind of album. It’s very much a continuation with it’s hammering with what we are and who we are.”

Currently leading the way for British rock bands in the US, they have already shared stages with the likes of The Rolling Stones, The Who, The Killers and Guns N’ Roses, and earlier this year completed a sold-out, star-studded four-night residency at the iconic Sunset Strip venue The Roxy in L.A where they were joined on stage by some very special guests including Chad Smith (Red Hot Chilli Peppers), Matt Sorum (Guns N’ Roses), Tommy Lee (Mötley Crue) and Jade Thirlwall (Little Mix).

The band are currently out on the road in the US with the Foo Fighters for the second time, on their Concrete and Gold tour.