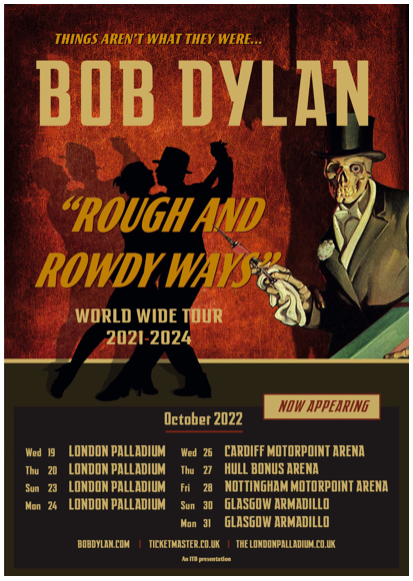 Bob Dylan has just finished “I Contain Multitudes”. It’s the third song he’s played here , and this is the sixth show of his tour. “Thank you!” he says. This is, according to a chap next to MV, who tells us he has seen the artist 88 times and been at all of these shows,  the second time he’s spoken to the audience on this run. The first was apparently at the London Palladium where he’d insisted “Mrs. Joe Strummer stand up” then told her that “Joe was a great artist and I think of him often.”

The aforementioned “…Multitudes” is a standout moment on the 2020 record “Rough And Rowdy Ways”. A genuinely brilliant album, and a stunning track, not least because in its lyrics Dylan likens himself to “Anne Frank” and “those British bad boys, The Rolling Stones”.

Dylan must believe in it too. For across the next hour and three quarters he plays nine of it’s ten numbers (the only one not shared is the closing epic “Murder Most Foul”) but he plays it in his way, not the way of the studio versions, and probably not the way he’ll ever do them again.

And those three paragraphs are why, essentially, you love Dylan or don’t get it. He’s contrary, probably deliberately so, because he can be, at this point, but he’s a genius and no one writes songs like him. And every one of his shows is unique.

Tonight he’s “On show and in Concert” as his t-shirts proclaim in a nod to his hero Howlin’ Wolf” armed with  couple to ease you in before the new stuff. Not that “Watching The River Flow” or “Most Likely You Go Your Way And I’ll Go Mine” compare much with the originals.

Basically, though, it’s a blues show with a touch of jazz. Dylan, exclusively behind his piano, except for two moments where he gets up and moves centre-stage to take the applause. However good the band are – and they are very, very good indeed – there’s no mistaking who’s got the charisma.

Older tunes like “When I Paint My Masterpiece” and “I’ll Be Your Baby Tonight” are essentially played as if they were on “…..Ways” and have their history erased. It’s an odd thing that Dylan does, and only he does to this extent, but even the brilliant newer ones like “False Prophet” and “Crossing The Rubicon” are 2022 versions, as it were.

Arena shows, and this is kind of a given, reach a crescendo somewhere in the second half. Not here. Instead, he plays a version of “Gotta Serve Somebody” with a totally new structure, a clever version of “That Old Black Magic” which belongs to another time and, perhaps the best things on “….Ways”, “Key West (Philosopher Pirate)” and “Goodbye Jimmy Reed”. Both have words and language that astound, but on “..Reed” there’s  a passage that sums Bob Dylan up:

“You won’t amount to much, the people all said

‘Cause I didn’t play guitar behind my head

Never took off my shoes, throw ’em in the crowd”

Everything is done without bombast and without, it seems, any thought of “pandering” as the words say, it makes for a show that’s not “a gig” in any conventional sense. Yet you know you are watching, in rapt attention (there’s a no phones policy and it really works here) something no one else will ever see.

The atmosphere is unlike anyone else’s shows too. He plays “Every Grain Of Sand” as his last song and plays the harmonica for the only time tonight. There’s a frisson through the audience as he does so.

Then, something astonishing happens. They do an encore. Dylan never does an encore, Ever. But then, its not every day we lose an icon: “Jerry Lee is gone” he says, “but he’s in all our hearts, so we are going to play one of his songs.” And they do a tender version of “I Just Can’t Seem To Say Goodbye” and underline, I guess, that even legends have heroes.

And with that, he stands centre stage again, points, and disappears. Maybe for the last time in Nottingham, who knows? At the end of it all, as you reflect, as you have to with Dylan, because the true majesty is never immediately obvious. There’s only one conclusion to draw: no other artist could, would, or indeed should, have done this show. For this artist, though, you wouldn’t want him any other way. It wouldn’t matter a jot if you did, either, because Bob Dylan (to paraphrase a song you might know) is not a-changing….