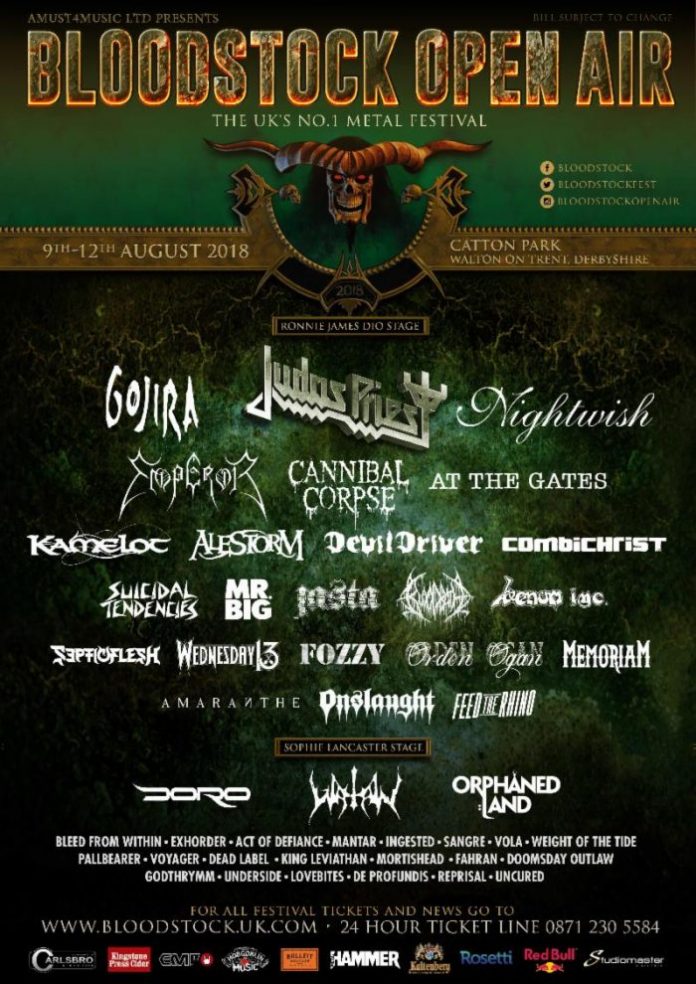 BLOODSTOCK is racing towards the weekend with some heavy metal Easter treats! Six more bands for August’s best heavy weekender, the first wave of club nights and the annual Easter Egg hunt on the BLOODSTOCK website, kicking off Friday 30th March! Check out www.bloodstock.uk.com from 8am Friday for details on how to hunt for Easter eggs and win a pair of festival tickets.

Joining us in a Friday Ronnie James Dio main stage slot are British thrash icons ONSLAUGHT. The band are working on their new studio album set for release later this year via AFM Records, so expect the world premiere of a brand new song at BLOODSTOCK! The band tell us “ONSLAUGHT have always loved playing at BLOODSTOCK, the UK’s finest metal festival and this year the show is going to be something special indeed! We’ll see you maniacs at the front!”

Also nabbing a Friday slot opening the main stage are British metal crew, FEED THE RHINO. The quintet’s latest album, ‘The Silence’ landed last month via Century Media with lead track, ‘Heedless’ landing its premiere via Daniel P. Carter on the BBC Radio 1 Rock Show. Have a listen! The band tell us “We are beyond honoured to be performing at this years BLOODSTOCK Festival. See you in the Pit!”

Japanese power metal ladies, LOVEBITES join us for a slot on Friday’s Sophie Lancaster stage. The five piece release a new mini-album, ‘Battle Against Damnation’ on 6th June, but if you’re not up to speed on the band, make sure you investigate this video for ‘Shadowmaker’ and additional news info over at their Facebook page.

London death metallers, DE PROFUNDIS join us in a Sophie stage slot on Friday. The band are readying the release in May of new album, ‘The Blinding Light of Faith’. Get a load of this new track ‘Bastard Sons of Abraham’ and then view the array of purchase options (digital, physical and special bundles) over on their Bandcamp page.

De Profundis (UK) – Bastard Sons of Abraham (Death Metal) Transcending Obscurity
Brit thrash outfit REPRISAL also land a Friday Sophie slot. Their new album, ‘None Survive The Sun’ lands this Friday 30th March via Hostile Media. Feast your eyes on the video for ‘Nephila’ and head over to pick up a copy of the album at
http://reprisal.bigcartel.com.

Progressive death metal New Yorkers UNCURED land a slot on Sunday’s Sophie stage. Having just wrapped a 28-date US run with Soulfly, the four piece come to Europe this Summer to play shows with their friends in JASTA. Check out their video for ‘Stygian Valley’ below and if you’re curious for more, get further info on the band over on their Facebook page .

Our first phase of BLOODSTOCK club nights start on Monday 16th April! More will be added for June/July, so don’t despair if your local rock club isn’t listed. Get along to one of the following events, check out some tunes from BLOODSTOCK bands old and new, and be in with the chance of winning weekend tickets or related giveaways. Expect fun ways to win tickets – previous year’s events featured the likes of bucking broncos, endurance tests, and air guitaring! Check your local club for details, as dates may be subject to change. Events for April/May run as follows:

Come join us in August! Standard weekend tickets are on sale now, priced at £145 for four days of metal fun. Grab yours at https://bloodstock.seetickets.com. If you already know you can only attend for one day, sign up for an email reminder so you don’t miss out when single day tickets go on sale at the end of June. Register your interest here – https://www.seetickets.com/register/bloodstock.

BLOODSTOCK will take place at Catton Park, Derbyshire on 9th-12th August 2018. Get additional information at www.bloodstock.uk.com