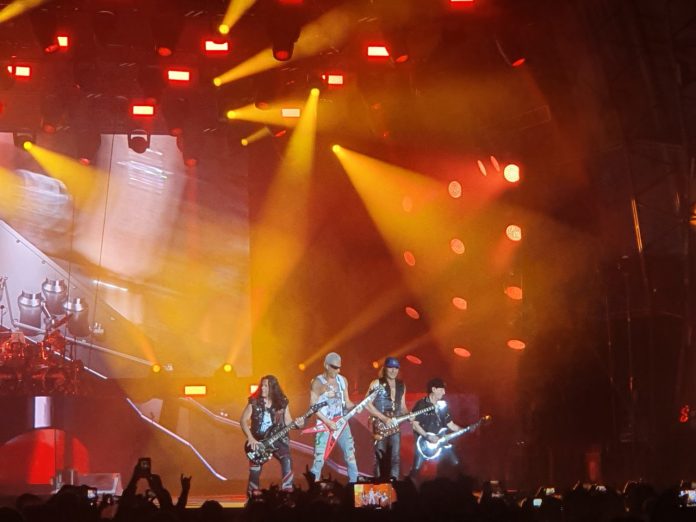 It must be tough to open the main stage on a Sunday morning but All Hail The Yeti have come from Hollywood to perform the task with vigour. The wind yesterday has died down the rain arrives just in time for “Art Of Mourning”. Oddly the cloudy skies illuminate these dark tunes and “Slow Season” and the title cut of the last album “Highway Crosses” show nicely, the sort of Pantera mixed with Southern overtones that don’t sound remotely Hollywood at all. Ending with the vicious “Mr Murder” shows their versatility, and hopefully they come back higher up the bill. (AT) 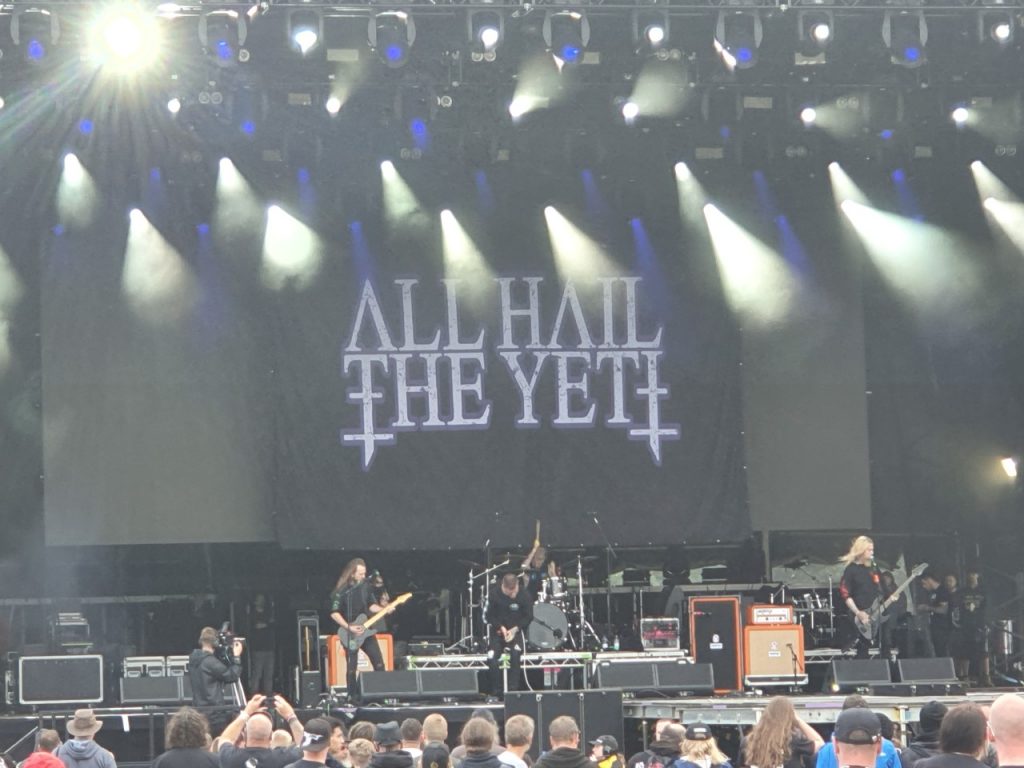 Aborted were somewhat spoiled by the rain which wasn’t their fault but a band like that would probably have been better off on the Sophie Stage.  That said they played a couple of good tracks I liked but the rest washed over me like the rain!! (DK)

Let’s cut to the chase, shall we? About two thirds of the way through Ross The Boss’ set they bring KK Downing out and do “The Green Manalishi (With The Two Pronged Crown)” and all of a sudden it feels like a metal gig. If “Breaking The Law” needs Rob Halford then blimey KK has still got it too. The rest of the set made up of Manowar tunes like “Hail And Kill” and “Hail To England” rather proves that there are better power metal bands than Manowar, but then it was never about that anyway. (AT)

Solitary: Excellent performance from the Thrash chaps.  Apparently it was their 25th anniversary show yesterday.  No idea they had been going that long but glad I caught their spirited set.  (DK)

Hypocrisy: Good stuff from the Swedes although again, as with Aborted, I can’t help but feel that that type of band is better suited to more intimate surrounds of the Sophie Stage where their power can be fully appreciated within the darkened confines. (DK)

The phrase “Rock Star” gets bandied about. Dee Snider, ladies and gents is a rock star. Absolute, copper bottomed 22 carat star of the show. Larger than life. 10,000 people in a field, oh please, he can have them eating out of his hand in seconds. He – and his mighty new band – play “We’re Not Gonna Take It” and from the front to the back there’s fists in the air. A bloke with a Cannibal Corpse tshirt is giving it plenty, as is the kid in the Parkway Drive top. That’s the point. This type of performance crosses boundaries. He doesn’t just do Twisted Sister, either (“don’t you go for a piss when I play new stuff, wait for the drum solo,” he chides the audience) and his brilliant recent album “For The Love Of Metal” is deservedly well thumbed. “Become The Storm” is wonderful, the title track better and as he ends with “I Wanna Rock”, he does. They did. And Dee Snider is band of the day by quite some distance (AT) 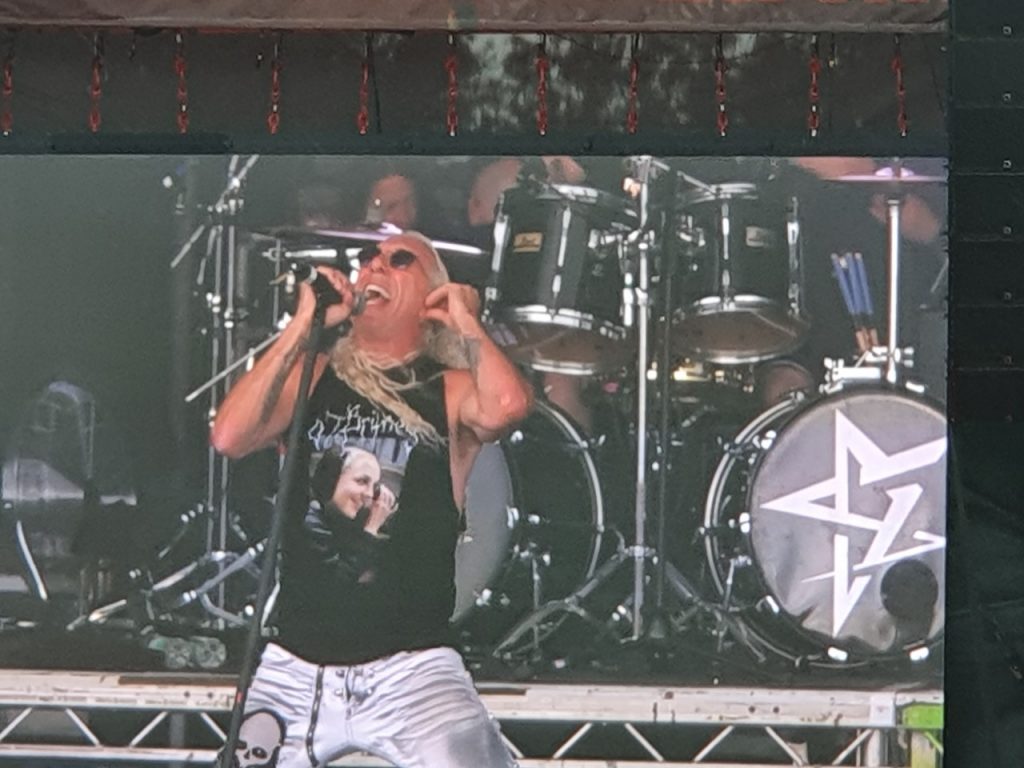 Cradle of Filth: They brought the fire and put on a good show. Good mix of tracks and a typical explosive vocal performance from Dani. (DK)

Queensryche are making their first appearance on the hallowed stage. Not the most metal of metal bands, as it were, they seem a little lost to start with, but this version of the band – and I’ve said it before and I’ll say it again – is the best they’ve ever had, and they soon grow into it. The classic stuff, “Operation Mindcrime”, “Jet City Woman” gets even the most casual observer onside, and the early work like “Screaming In Digital” has aged brilliantly, especially now it is being sung by the fine Todd La Torre. An hour that finishes with a flawless “Eyes Of A Stranger” became truly compelling.

Batushka: I’m all for atmospherics in my black metal but they need to take a leaf out of Behemoth’s book as just standing there with veils over faces and standing still for an hour, and I was reliably informed that was all they did as I left after three tracks, just doesn’t cut it.  Looked great but disappointing as a live show. (DK)

The Lazys: Might well have been band of the day if i had stayed for the whole show but the five songs I saw were bloody marvellous. probably could have seen it all if I had known that the Scorps were running late.  Actually, thinking about it they maybe waited for Lazys to finish their set first as there wasn’t supposed to be anyone clashing with Scorps.  An opportunity missed to see their full set but something tells me the chance will come around again soon. (DK)

Scorpions – Good show as band’s of that calibre and back catalogue rarely provide anything less than full value for the almighty dollar, but as with the majority of headliners a little too much filler and not enough killer.  I estimate they could have played at least another four tracks instead of extended instrumentals and drum solos.  Both of these have their place, perhaps in a 2hr + set but not at the end of a long day at a festival.  Also playing two lots of medley’s is a bit of a cheat in my book.  That said when they were just playing their songs they were superb. (DK) 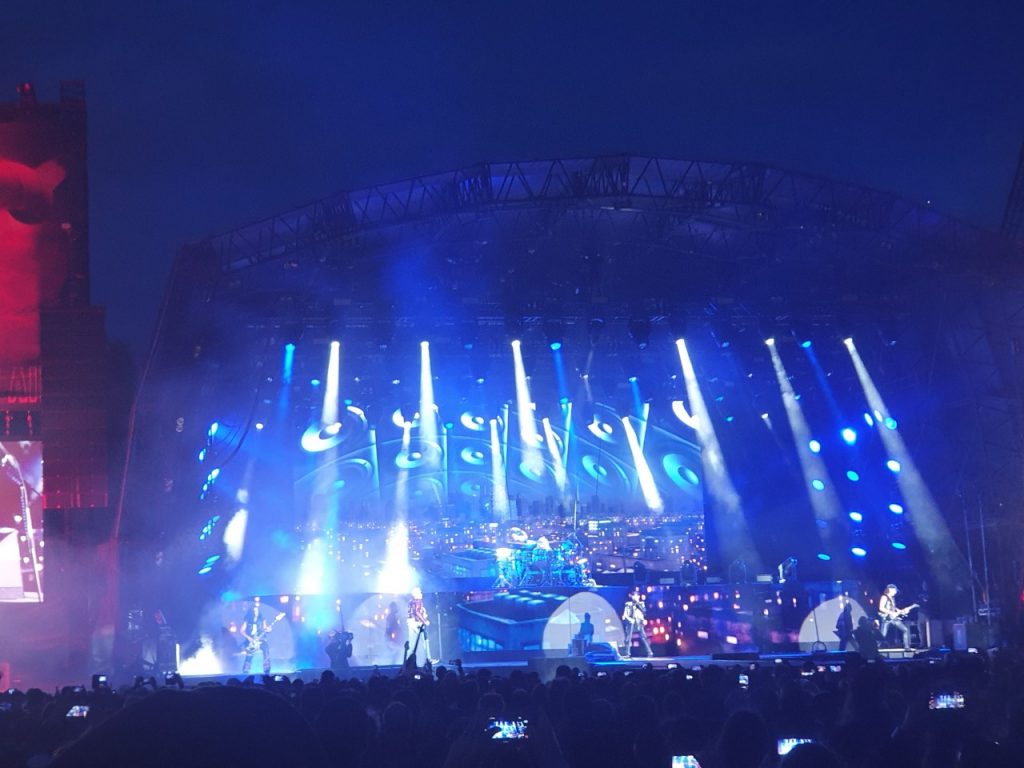