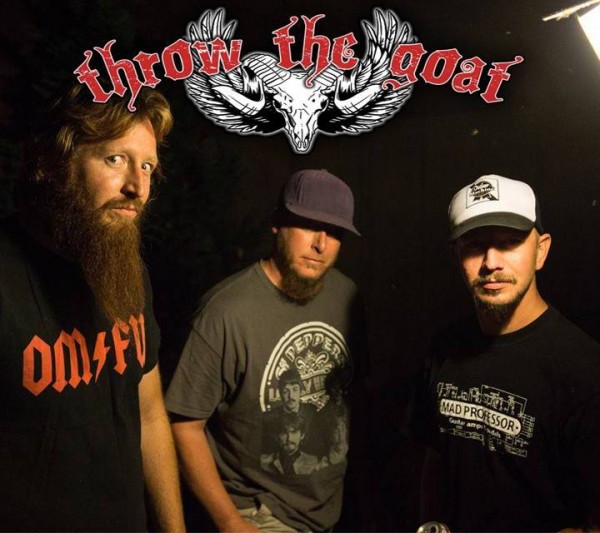 Throw The Goat are back – and recording live!

Rock ‘n’ Roll is not just about music: it’s a way of life. It is a state of mind, a motivational tool, a positive force and an inspirational belief. It’s the most exciting, life-affirming noise that exists on this planet, and no one has demonstrated this more than Californians Throw The Goat.

Imagine Bon Scott and Sam Kinison being summoned from the dead by Lemmy, Lars Frederickson and Nick Oliveri for a night of debauchery…. Throw The Goat would be the soundtrack to the inevitable 2am police chase.

The album is set for release on 31st March in the US and 20th April in the UK through the band’s own DIY label Regurgitation Records. The ten songs on ‘Blood, Sweat & Beers‘ are the end result of months of hard work by Michael, Brian and Scott, and is available for pre-order via Throw The Goat‘s bandcamp – http://throwthegoat.bandcamp.com/

Throw The Goat have this to say on the release:

“We couldn’t have picked a better album title, because that’s exactly what went into the making of this. We’re beyond excited for people to finally hear it, and we couldn’t be more proud of how it’s turned out.”

From the highly energetic ‘Buffalo’ through the raucous ‘All We Have’ (featuring JJ Jackson of York heavy rockers The Bastard Sons, who toured the UK with TBS in 2013) and on to the anarchaetic ‘8 More Minutes’, ‘Blood, Sweat & Beers’ is packed full of anthems for every mood, all the while delivered in Throw The Goat‘s unique, genre bending style.

‘Blood, Sweat & Beers’ was recorded live (with no click track!) in only a week, with vocals and overdubs added later. It was recorded, mixed and mastered by Finchdrummer Alex Pappas (who also did Throw The Goat‘s début album, ‘Black Mountain’).