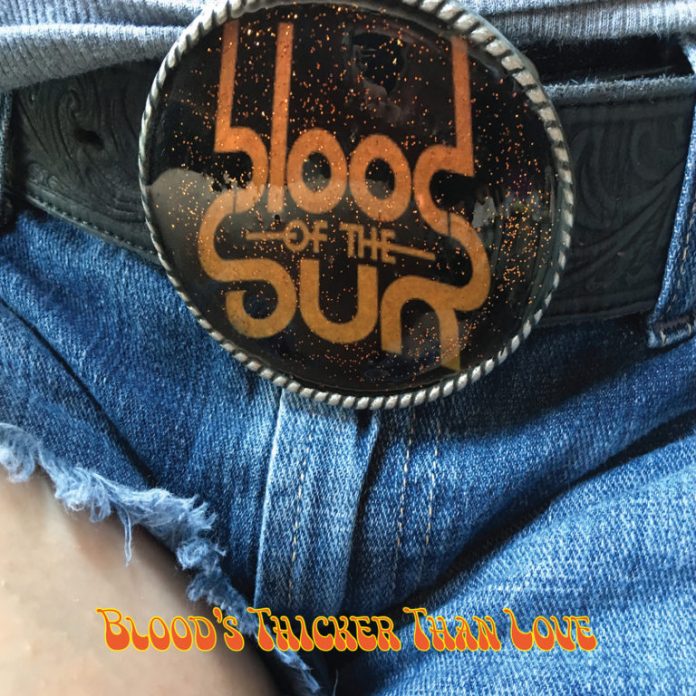 You know the feeling you sometimes get that you were born too late – or is that just me?

I was born in 1975. This means that my favourite bands as a boy were whatever hair metal band was being imported from the US at the time, from the big ones like Bon Jovi, Skid Row, to Guns N Roses, and some of the ones that weren’t household names in their own living room, Johnny Crash, Blackeyed Susan, and whoever else we found.

Then you get older and you think: “man, if I could just have seen Sabbath, Purple, AC/DC, Thin Lizzy and the rest, not on farewell tours, but on the real peak!” (Note: this is not helped by one of my closest mates being a lot older than me and explaining to me at length how he’s seen Phil Lynott ten times pretty much every time we speak…..)

So what do you do (apart from getting some new mates, obviously)? In my case you start a website and bitch like hell about the world, but there’s a better way. Do what Blood Of The Sun did. Make an album of stuff that sounds like it proudly came out when rock was young.

“Blood’s Thicker Than Love” is nothing more and nothing less than a six-song study in just about everything that’s ever been cool, ever.

Not – strictly –  an EP either, it clocks in at around 40 minutes and even better than any of that, makes good on their promise to: [draw] from Deep Purple, Mountain, Humble Pie, Ted Nugent, Led Zeppelin and probably 50 other bands”.

You have to mention Purple first really. The opener “Keep The Lemmy’s Coming” (about the idea that Jack And Coke was going to be renamed) is like a mash up of Kilminster’s boys and Jon Lord. The organ of Dave Gryder propels this like some filthy “Highway Star” while the guitars slash and new singer Sean Vargas sounds like he was born only for the purpose of singing in a denim clad rock band.

“My Time” starts with a cowbell and a guitar solo and, really, anyone who has rock n roll in their veins knows that’s all you need, right? The pick of them, though, is the incredible, the wonderful, the enormous “Living For The Night”. Imagine the best rock n roll party that you can think of, then double it. Never has a song sounded this urgent and turbo-charged for eight minutes. Boring prog this is not.

“Air Rises As You Drown” actually has the temerity to start with a drum roll, as if its just waiting to explode. When it does it sounds like Night Flight Orchestra have turned it all up to 11 and fancied a freak out, “Stained Glass Window” is blues, but it sounds like the Devil did a deal with them at the crossroads never mind the other way around. Mountain? Behave, this is Everest.

And just to prove this isn’t a fluke, then along comes “Blood Of The Road” with some Faces like piano, and what sounds like it might be the best jam anyone’s ever had. How good? Well, Tony Reed once of Stone Axe masters this, and this type of retro thing ain’t sounded as good since their two genius albums a few years back.

In case you hadn’t guessed, “Blood’s Thicker Than Love” is phenomenal in just about every sense. Whether it’s the new singer, the fact that founding drummer Henry Vasquez is back or the stars just aligned, who knows? The fact is that whatever alchemy is at work here makes something perfect. One of those where 10/10 ain’t enough.