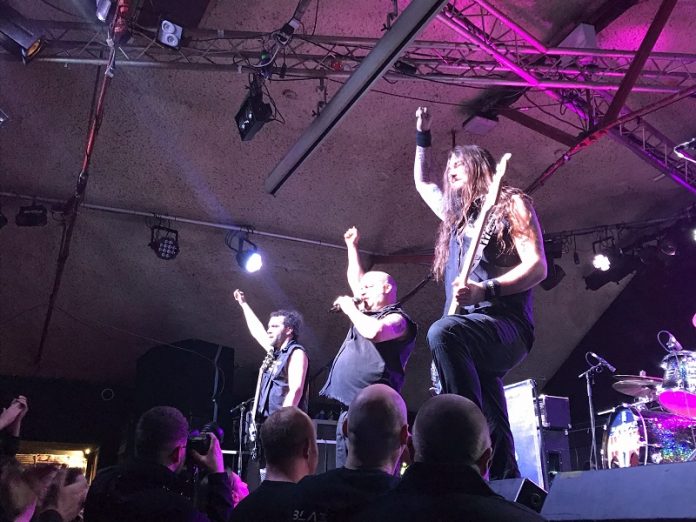 Whenever Harry Kane scores a goal – I know this from bitter experience, because he nets against my sorry shower of a football team seemingly for fun – the Spurs fans like to sing that he’s “one of our own.” In a metal sense, that is never truer than when referring to Blaze Bayley, and never more particularly than when Blaze is here in the Black Country. Because for one thing he lives up the road but for another, there is always the sense with Bayley that he is representing “us”. The metal fans, the ordinary blokes and women who love this music – just like him – the only difference is he’s got the gift of being able to make great music too, as well as being a live tour-de-force.  Not even The Beast From The East can stop him for long. This show fell victim to the snow a few weeks back and is now the last of the UK shows.

Like many here, I’ve seen Blaze Bayley more times than I can recall. In my case, Blaze has literally been there since the start. Almost 27 years ago I went with my best mate to see his band Wolfsbane open up a youth rock club in Birmingham. They signed autographs, but they played a few songs too, making it the first gig we ever saw together.

Blaze engenders that type of loyalty. When he went off to be the singer in Iron Maiden he went with our good wishes. It was as though one of us was fronting Eddie and the boys. The two albums he made with the Irons are better, too, than they are often given credit for. There are four songs from that period here and a Blaze Bayley show is about the only place you can hear “Futureal” played live, the only place you’ll probably ever come across the brilliant “Virus” (a proto for the more proggy stuff Maiden do these days) and the only way to see “Angel And The Gambler” turned into a kind of Status Quo boogie, not to mention “Man On The Edge” being ace.

But as Blaze notes himself during one of his musings, that’s the past. These days he’s 20 years older and he’s got ten studio records of his own. The last three of these – the “Infinite Entanglement” series – are perhaps the best (for my money that’s a toss-up with “The Man Who Would Not Die”) but they are certainly the most ambitious, with the story running across all three.

The set is – rightly – heavy on them too, with a good deal more than half the set devoted to the last three years. “Redeemer” is a fine start. Fists in the air glee is when Blaze is at his best and this provides it, “Are you Here?” follows up and gives you pause to reflect just how talented the boys from Absolva – they are the band here – are. Chris Appleton is a gifted guitarist, Martin McNee a powerhouse drummer, and Karl Schramm a fine anchor on the bass, but that only tells part of the story, it’s more that they all love doing this. Take the band introductions towards the end of the set. Pantomime they might be, but everyone is in on the joke and you can’t fail to get carried along. And, with the greatest respect to all the other Blaze Bayley Band members over the years, these boys can play these songs better than any of them. Exhibit A is the wonderful version of “Silicon Messiah” – the only time Bayley dips into his own back catalogue here.

This is not a 90 minute for history. This is about the “….Entanglement” trilogy and a couple of them really stand out. “Independence”, because of what it represents, the autonomy, the artistic freedom to do this at all, and the closing “Thousand Years”, because in another time, in another life, this would be a stadium filler of a thing.

There’s an encore – not that Bayley, ever the joker, ever leaves the stage, so busy is he hamming it up – and the title track of the three albums is played, symbolically, and “Dark Energy 256” sees the finish.

The finish too, of a gig, of an experience, that is quite unlike any other. Blaze Bayley remains one of – if not the – most honest and hard-working performers in Britain, but oddly nights like this are not his reward, instead, as ever, they belong to us all.