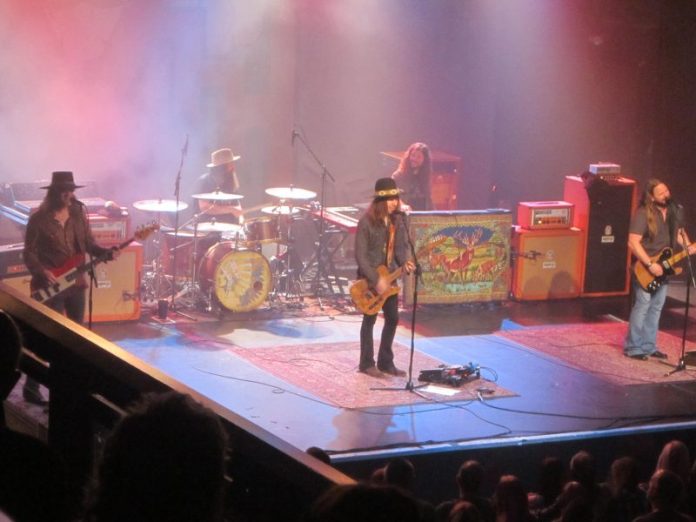 Those words are more than just the stomping chorus to Biters’ best song (to be fair, all their choruses are stomping….) that is Biters mission statement. And you know what? There are worse years you could choose, there are worse sounds you could choose than the glam rock of T Rex mixed with Thin Lizzy’s ear for the twin guitar harmony and a huge dollop of 80s sleaze. Also, like all the great rock bands – and you best make no mistake Biters are a great rock band – there is all the genuine thought that it could all end in chaos and fisticuffs at any given moment. New song “Going Back To Georgia” is written about a fraught journey home from a tour, and you suspect that there is just enough friction to keep things interesting. Elsewhere, there is a middle finger in the air insouciance about “Heart Fulla Rock n Roll”, and there is enough danger in “Lo Lives In Hi Definition” to suggest that the longing to be their heroes might not have to wait too much longer. With a new album out next month and current single “Stone Cold Love” just stone cold superb, this might be their time. There is a loose-limbed cool about frontman Tuk, who looks like a star and sounds like he was born to be one. He is one quarter of Biters and they are coming for you. Lock up the good china just to be safe.

Good, old fashioned rock n roll. That’s all Blackberry Smoke ever were. That’s all they’ll ever be. They’ve ended the tedious debates about whether they were to country to rock or to rock for country by being brilliant. And they’ve filled venues up and down the land with the best advertising of all. Word of mouth.

And if that might all sound a bit lo-tech in these days of Facebook likes and Twitter followers, then fair do’s, but in an ever-changing world, one thing remains true. There is always a place for great songs. Which is precisely why their last album – 2016’s brilliant “Like An Arrow” – crashed into the top 10 and it accounts for why tonight is sold out.

They’ve worked hard to get to this point too, and their back catalogue is extensive. This means that no two BS shows are the same. Tonight’s starts like an express train. Songs like “Fire In The Hole”, “Six Ways From Sunday”, “Working For The Working Man” and a quite magnificent version of “Waiting For The Thunder” come and go in a blur.

Their skill, though, is in the changes of pace. So “The Good Life” is evocative southern rock, “Sleeping Dogs Lie” is combined with a jam on Led Zep’s “Your Time Is Gonna Come” but before you know it, it’s the CCR like strains of “Sanctified Woman”.

That one is from their earlier material, from where it is joined by “Up In Smoke” which rouses the rabble like no other, before things return to outright country with the pair of “Ain’t Got The Blues” and a gorgeous “Lay It All On Me”.

Charlie Starr isn’t the type of frontman to make flashy pronouncements on stage, and similarly his band mates have a kind of blue collar, working class vibe. All of which makes “One Horse Town” – which quite simply should have been on Springsteen’s “The River” but wasn’t, almost perfect.

The main set ends with the classic rock storm of “Shake Your Magnolia”, but BS are big enough indulge in rock star BS now and come back. When they do it is for an encore of “Shakin’ Hands With The Holy Ghost” – arguably the song that woke Britain up to their magic – and the even better “Ain’t Much Left Of Me.”

“…..Me.” might talk about their struggle to get here: “I’ve been knocked down, dug out and left for dead. Barely held together by two old threads” sings Starr. If that was the case, then nights like this are all the sweeter for being a victory lap. More than that they are a vindication.

Boogying on down with the redneck backbeat – to use their own words – never sounded better. Blackberry Smoke are ready to be anointed as the new kings of the south.

Previous article
Beer It Is!
Next article
Featured Band: Doublestone