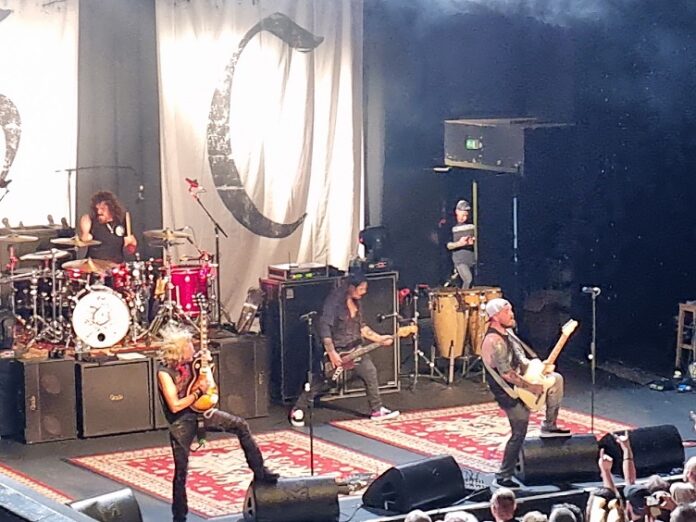 “I never believed this tour was gonna happen” says Kris Barras. “Then I saw Black Stone Cherry standing there and it was like ‘I’d better learn these songs’”. There’s more truth than normal to the levity here, because the KB Band are a bit different to when they were last on stage. For 40 minutes here they set about proving the journey they began on their last album is moving further forward and with it, they are moving further into rock. Massive, great, rock riffs characterise the show tonight- pointedly they kick off with most recent single “Dead Horses” and you know what? They’ve never sounded better than they do right here. Older work like “Rock N Roll Running Through My Veins” (apt I suppose as it was always there) and newer stuff like the fabulous “Ignite (Light It Up)” are infused with a new…..well, something. A new edge, maybe? Whatever it is I’ll tell you this, wait until you hear “Who Needs Enemies” and tell me you aren’t listening to one of the best on these shores. Even the cover “Going Down” (done by everyone) sounds like they own it and when “Hail Mary” makes its appearance (good enough now to end sets) the crowd singalong is assured. Barras says “we didn’t have a lot to do except write songs for 18 months” and that’s true. Except they’ve written mighty ones and are evidently hell-bent on attacking stages with them.

Birmingham is ready. No joke, the between band playlist goes down better than many actual gigs I’ve been to. I mean it’s almost as if there’s been no concert for 18 months …..

But there’s more to it. There really is. You see, as much as this would normally be rock star bull – and however good they are Black Stone Cherry aren’t rock stars – the band and this city have a special bond. They recorded their live album just up the road, after all.

However, tonight and for possibly the only time in his life, Chris Robinson sings “Things My Father Said” on his own. With the words: “I never knew what this song meant until 30th June this year.” He lost his dad that day and he’s visibly moved to tears by the end of the track. The reception he gets, though. Genuinely, and with all candour, there’s never been a more spine-tingling moment in all the shows I’ve seen in this venue. He says two things after this that sum up the night: “I dunno if I’ll ever do that again, but the one place I knew that could carry me if I couldn’t do it was right here.” Then: “enough tears, man! Lets do the rock n roll again.”

And, my how they do it. Let’s be real. There aren’t many hard rock bands on the planet who can match “Blind Man,” “Blame It On The Boom Boom”, “White Trash Millionaire” and “Lonely Train” reeled off one after the other, and you kind of feel that both band and crowd deserve this.

This is a slightly different band too, for the first time in 20 years they’ve got a stand in. Bassist Steve Jewell – in while Jon Lawhon is attending to “family business” – has slotted in smoothly. And for an hour and 40 minutes tonight it feels like this is a celebration of music and dare we say, normality.

“Me And Mary Jane” does what it always does and the likes of “Like I Roll”, “Cheaper To Drink Alone” and “In Love With The Pain”, a stand out moment on last years “The Human Condition” are all fabulous songs, while “Soulcreek” feels like an escape, plus the return of a glorious “Hell Or High Water” is most welcome.

Elsewhere, the band are arguably greater than the sum of their parts, Ben Wells looks like the effervescent life and soul, drummer John Fred Young anchors it down, and in all fairness, they are that rare thing. Two decades of consistency, but more, they keep on getting better.

The encore of “Peace Is Free” seems made for the post-Covid world, communal and designed to make things better – and if you had to sum them up somehow, isn’t that what you’d say about the band.

Towards the start of the set, they play “In My Blood” a song written for the loved ones they leave behind when they are on the road. These are some of the words:

“It’s in my blood

And it’s in my bones its in my heart

And soul and when I’m gone

If their families were here tonight they would have. It isn’t too much of a stretch, either to suggest that the love for the band could have been felt back home in Kentucky.