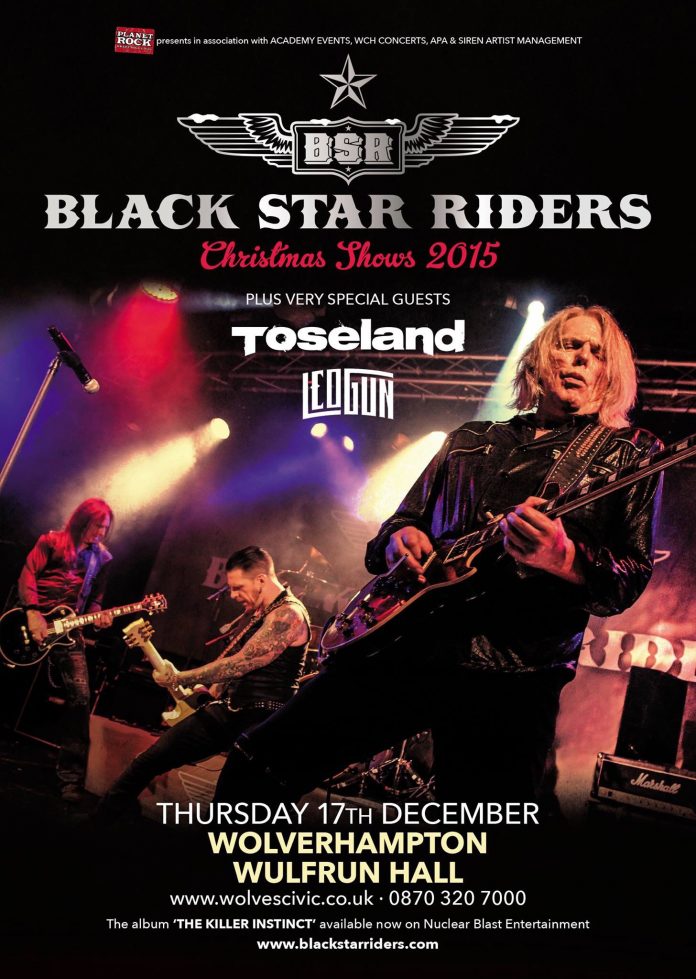 Finally, a Christmas party that isn’t a waste of time

London three piece Leogun certainly have made a few waves this year. It’s easy to see why. Rock n roll the way it used to taste – and frankly the way it still should too – but with enough bluesy influences and psychedelic swirl to make it more interesting than some retro pastiche. Afforded half an hour here, they empty the bars pretty sharpish and no wonder when work like “Magic Potion” greets the early arrivals. They save the best for last. “Everyday” has a massive groove and merrily turns itself into a jam by the end, seemingly for the hell of it. 2016 could be big for them.

As it could for Toseland. James Toseland, is a lucky boy. Brilliant piano player, champion motorcyclist, married to Katie Melua. All true, but the thing is Toseland, well, he just wanted to be the singer in a band. He is. And the song called just that is still his anthem. One of its lines actually sums him – and the band that carries his surname – up: “I’m here and ready to play”, he says at the end of the chorus and it’s true. A better and more polished outfit given the near constant two years or so they’ve spent on the road and songs like opening pair “Crash Landing” and “Burning The System” prove that. Set to release a new record in the Spring, a new track “Too Close To Call” brings to mind the swagger (pun intended) of Gun, while the title track of his latest EP is bluesy and hook filled. He gets the piano out for the closing, soaring “Renegade” and it’s clear that not only does Toseland love what he does, he absolutely believes in the outfit too. Their rise will surely continue.

A day off on your big arena tour would mean most bands waking up at the crack of noon and lazing around the tour bus getting up to no good (we assume). For the Black Star Riders, it means nipping away from the enormo-domes where you are opening for Def Leppard, and playing a headline Christmas gig, for no other reason, apparently than they could.

The hardest working band in rock n roll, is also right now one of the best there is. Live or on record there is a chemistry here – particularly between Ricky Warwick and guitarist Damon Johnson, but also recently added bassist Robbie Crane has fitted in seamlessly – that essentially makes them incredible.

On stage tonight for an hour and 40 minutes, the band that formed from the ashes of the final – and best since Phil Lynott’s death – Thin Lizzy line up is now confident enough in their own material and (in the UK at any rate) has enough fans to carry that with 12 of their own songs and only six Lizzy tunes.

One of the Riders originals, “Bound For Glory”, is the best track released in at least five years, another, “The Killer Instinct” runs it close, and a third “Finest Hour” is phenomenal. Which is none too shabby when it’s coupled with “Are You Ready?” “Waiting On An Alibi” and “The Boys Are Back In Town”. Indeed, such is the depth of their material the latter hasn’t been seen on the Leps tour and Lizzy staples like “Cowboy Song” are absent here.

This is every inch a band of the people. No band has toured more than BSR in the last two years, and there’s nothing rock star or arrogant about them. Old school right down to the fact they just play great music to as many fans as they can, there’s also no ego-stroking encore. This being a Christmas gig, there is a festive theme to one of the selection, but if you are going to sing “We Wish You A Merry Christmas” then you might as well make it The Greedy Bastards version.

Finishing as ever with a rip roaring “Whiskey In The Jar” singer Ricky Warwick – who actually appears to have been born for this outfit – screams that: “we are only getting started, just you wait!” Does that mean, then, that the band of 2015 might be the band of 2016 too? Probably. On this evidence, there’s no stopping them.