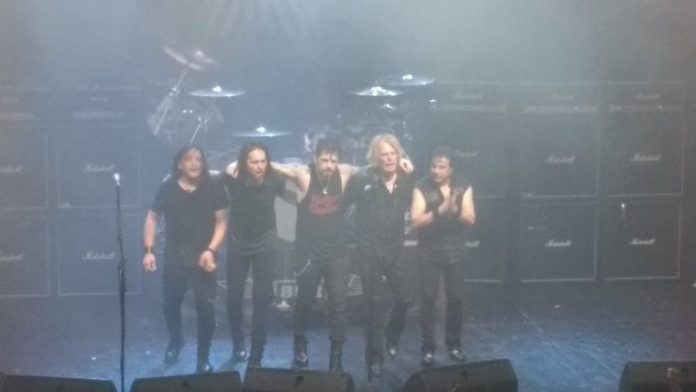 Birmingham comes under heavy fire as the boys, well they’re back

One of British rock’s true survivors, Gun remain a live draw throughout the land. Presently they are gearing up for another period of activity as they have a new record due later this year. They are sufficiently down the line with it to play a track from it, and “She Knows” has hints that it will be a heavier affair than 2015’s “Frantic.” They might start with a track from that album, “Let It Shine”, but the rest is from their late 80s/early 90s heyday. There is no arguing either, with the quality of work like “Better Days” and “Shame On You” – which ends things. MV’s personal favourite from way back when “Don’t Dream It’s Over”, which we still maintain would have been number one in 50 countries if there was any justice in the world (or Bon Jovi had written it) is always welcome, as is “Steal Your Fire”. It’s not easy to show their full range of skills in half an hour, but Gun – as they always do – give it a go.

There are many similarities between the openers and the band that follows them. The Backyard Babies’ return a couple of years back was one of the most welcome in recent times. Offering a set that has plenty of material from their later period, the Swedes are in the mood for a party. To be fair, you could probably level this at livewire guitarist Dregen on most evenings, but it seems to be especially the case tonight. For all their punk swagger, however, the fact that these four have been together since 1989 makes them one of the tightest outfits around. That’s why “Thirte3n Or Nothing” slams in quite such a fashion and “Dysfunctional Professional” is such knockabout fun. Then they’ve got the aces in their particular pack, to be played whenever they choose. “Brand New Hate” is catchier than it has a right to be, “Bombed (Out Of My Mind)” shows why “Total 13” was such a seminal record of the late 90s, “Minus Celsius” and the stomping closer, “Look At You”. An absolute classic in its own way it shows that Nicke Borg and the boys could have out-punked the Pistols if they’d gone down that road fully.

There are many reasons why Black Star Riders are such a wonderful band. This one will do. About half an hour into their set tonight, guitarist Scott Gorham plays his solo for “Hey Judas”. There are three kids at the front who are making the Wayne’s World, “we’re not worthy” motion throughout.

Introducing that same song, frontman Ricky Warwick, calls it a golden oldie, and it has been five years and three albums for the band. The music they create, has connected with people in a huge way. The crowd at this show is heaving, their just released “Heavy Fire” record crashed in at number 6 in the album charts and they have become a serious big deal.

All of which is a roundabout way of saying that the decision to step away – mostly – from Thin Lizzy tunes is entirely the right one (they only play “The Boys Are Back In Town”). Everyone knows their history, and they still have that Lizzy element to the songs – listen to “The Killer Instinct” or “Dancing With The Wrong Girl” and you hear it, right there. Plus, without overplaying it as long as Scott Gorham is playing guitar Thin Lizzy has a beating heart. But with all the due respect to the greatest rock band ever, this is the greatest rock band of right now.

They’d be too modest to say it, but they know it. Why else do they walk on with no build-up and why else is there no encore? Simply because they don’t need fanfare or fuss. Why would you when you’ve got these songs?

More than half of “Heavy Fire” is played. The title track is a mighty start, “When The Night Comes In” is superb and “Testify Or Say Goodbye” possesses what we probably have to call the “signature BSR sound”.

The debut “All Hell Breaks Loose” is cherry picked for its classic title track, and “Bloodshot”, while “Soldierstown” sees the second is thumbed too.

But really it doesn’t matter what they play. BSR have a special kind of chemistry. The bond between Warwick and Damon Johnson (who write most of the songs together) is evident for all to see and Scott Gorham plays the part of Scott Gorham magnificently.

Where most bands have the ego for an encore, BSR merely stay on stage and deliver three more. “Kingdom Of The Lost” would, in other bands be a real showstopper. Here, its followed by the two best songs of the last five years. “Bound For Glory” and “Finest Hour”, which rather sums this up.

Warwick chooses a different summation. He delivers these words with all the passion in the world. “We,” he screams at the end. “Are the Black Star Riders!” They are too. They aren’t anyone else, and this is their finest hour.