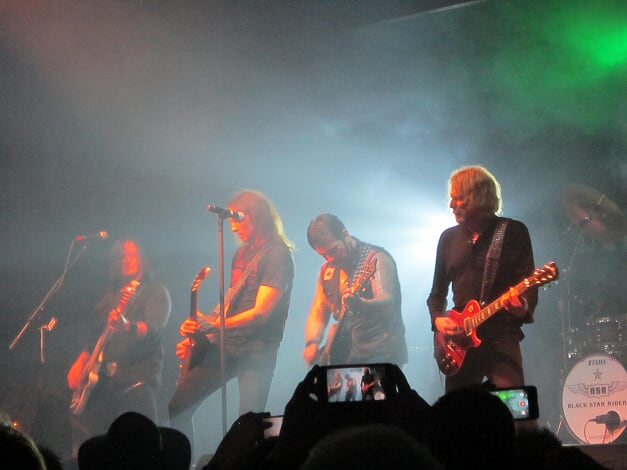 Just as Black Star Riders are about to play “Testify Or Say Goodbye” tonight, Ricky Warwick fixes the Royal Leamington Spa crowd with a look and says: “This was our second Radio 2 single of the week. we’re the housewives choice. Finally, my mother accepts what I do. It only took 30 years.”

To paraphrase Ian Hunter, for Warwick it is a mighty long way down rock n roll from being in The Almighty – a band with the song that had the most swearwords ever played on the Radio One top 40 rundown (which, by the way, is absolutely true), to being single of the week on Radio 2. But that is this career and that is the now Black Star Riders. Or put another way: where once we were wild and wonderful, now we just revel in a wonderful band.

It’s been a while since BSR trekked around this country in support of last year’s marvellous album number three “Heavy Fire”. Moreover, these are shows with an emotional side to them, given that they mark the last with Damon Johnson, who has basically been Warwick’s partner in crime for the last six years. It is Johnson’s wedding anniversary tonight, too.

As such, this 90-minute set amounts to a celebration of their wonderful music. No one else’s. Look, everyone knows the history, but this is no longer “the band that was Thin Lizzy”. They only play one Lizzy original song, in “Jailbreak”, preferring instead to stand by their own magnificent back catalogue. It is the right decision too. You can’t live on past glories if you want a glorious future.

So it is that “Bloodshot” provides the opener, and then as the solo for “All Hell Breaks Loose” hits in the next song, Warwick does that thing he does every time and goes “alright Scotty…..!” and Scott Gorham lays waste to the thing. I was there – in Milton Keynes at the Marshall Amps studio – for their first ever gig exactly five and a half years ago tonight, and the joy on both men’s faces has never altered.

Over the years, though, members have come and gone albums and tours likewise, and along the way, they have built up an array of hard rock songs that is without equal in the modern era. “The Killer Instinct” would be the encore elsewhere, here it is tossed out in the middle, “Charlie, I Gotta Go” is quirkier than many they have, but my goodness it is catchy, and “Heavy Fire” has an effortless cool about it.

A collection with one pause for reflection. “Blindsided” is aptly named, perhaps, because it sort of sneaks up on you to leave its mark, and the slower building “Hey Judas” is superb in this setting.

The last half hour of the thing is effectively a victory lap, a goodbye for Johnson and a reminder of what they’ve all built. “Bound For Glory” may well be the best song written this decade but if it is, then crikey, “When The Night Comes In” runs it close. And when this is done there’s “Kingdom Of The Lost” and their de facto anthem, “Finest Hour”.

No encores. BSR never strike you as a band with ego, just five guys who love playing rock n roll. They could milk the fact they’ve got “Whiskey In The Jar” to play last, but they don’t, not really. They know its awesome and they let it speak for itself.

Before they play the last couple Johnson gives a speech in the band intros, and there’s a feel of it being the end of an era. That said, though, Warwick follows it up by saying “here’s to the future, we’re only just getting going.”

There’s been some great times – and they’ve been rightfully and properly celebrated here. But the finest hour? That might still be on its way. Mrs Warwick, your boy and the other four of them: they’re doing just fine.