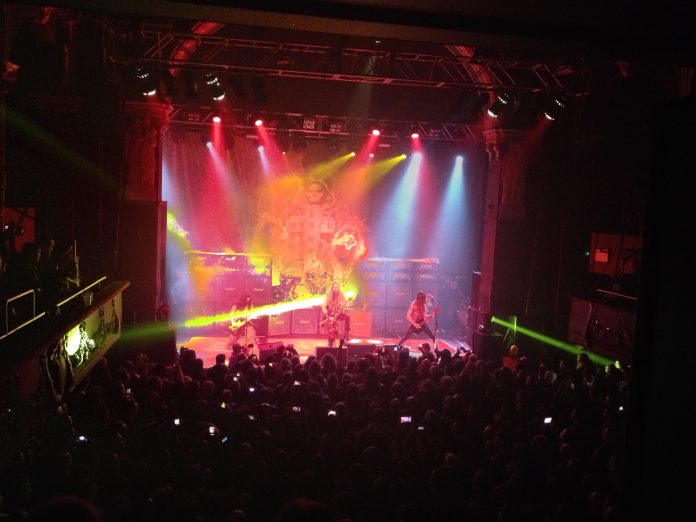 Zakk and the boys throw down with the Birmingham chapter. And bring one of MVM’s favourites along for the ride

“It’s great to be in the Black Country, with Black Tusk and Black Label Society,” so says Crobot’s lead singer Brandon Yeagley. Perhaps, on that basis, we should rename them Black Crobot for the night. The bottom line about Crobot is this – and anyone who has heard their “Something Supernatural” record will surely agree – they are just absolutely incredible….and there’s no other way to put it. Beginning tonight with the monumental groove of “The Legend Of The Spaceborne Killer” they set about convincing those that don’t already know this that they are deadly serious. Essentially part blues, part stoner, or put another way, Clutch with Chris Cornell circa-“Badmotorfinger” wailing over the top, they use their half an hour to maximum effect. “Nowhere To Hide,” “La Mano De Lucifer” with its key line of “it’s better to reign in hell, than serve Gods will,” and the downright funky “The Necromancer” complete with harmonica flourishes, are all classics in waiting. They riff, they crunch, they look like they are having a great time, and in the case of Yeagley, they swing those hips a little like an evil Elvis. “We are Crobot from Pensylvannia,” he says. “That’s C.R.O.B.O.T.” We know, Brandon, we know.

In the face of all that, the next band on could seem weedy. But when that band is Black Tusk, they probably aren’t going to. To be fair you could put the Savannah, Georgia three piece in a cage with Slayer and it would be far from certain which band leaves first after the fight. Overcoming the awful tragedy that befell them last year when their bass player Jonathan Athon passed away can’t have been easy, but this type of Sludge Metal was never meant to be comfortable. Monumentally heavy at one point, almost hardcore the next, Tusk are a band who lives up to the old maxim, rock hard, rock heavy, rock animal. Basically their set amounts to a 45 minute long very fast bludgeoning with something very hard and very blunt – which is just the way we like it. Their idea of light and shade is one song that rattles along on a massive metal groove that is comparable to Orange Goblin playing punk rock. With new four-stringer Cory Barhorst filling in manfully, the trio are louder than any three piece has a right to be, and with songs like “Bring Me Darkness” (which begins with a chant of “666”) Black Tusk are quite simply another in a line of wonderful bands from Georgia.

Just before Black Label come on stage there’s a mashup of Led Zep’s “Whole Lotta Love” and Sabbath’s “War Pigs.” It might just be that these are Zakk Wylde’s favourite bands (they are, he said so when MVM interviewed him the other week) but, by the great god of Ozzy, BLS don’t half sound like some glorious mix of the two when the mood takes them.

They are also absolutely the loudest band MVM has seen in a bloody long time. “The Beginning…. At Last” shakes the balcony, and “Funeral Bell” absolutely slams. The latter sees Wylde stand stage front, elevated above the rest, a mass of hair and beard, and looking bigger than you remembered, man and his instrument absolutely at one. In itself it is a joyous event.There’s barely time to reflect on it, though, as we are off again with a fist pumping “Bleed For Me” which takes it’s tinges of Alice In Chains and turbocharges them.

The reason the band (and make no mistake, even if Zakk is absolutely the focal point BLS is a band) are here is to celebrate the “Catacombs Of The Black Vatican” record which emerged last year. Our first dip into it, “Heart Of Darkness” is a triumphant affair, while the elongated opening and effects that accompany “Suicide Messiah” mean that even BLS are under no illusions that this track is a touch special.

“….Vatican” is a fine record and “My Dying Time” from it comes alive here, while “Godspeed Hellbound” from “1919 Eternal” is fast, frenetic and superb (even garnering a pretty passable moshpit).

It sometimes goes unheralded, but BLS have always been capable of moments of real tenderness amongst the wall of noise. Nowhere is this shown better than “Angel Of Mercy” which 15 years ago would have seen thousands of lighters in the air. They even find time for a piano solo as Dario Lorina starts “In This River” before Wylde takes over on the keys, dedicating the track to Dimebag Darrell.

From here, there’s a three song sprint to the finish. “Blessed Hellride” is a highlight of the trio, with it’s huge chorus (and double necked guitar), “Concrete Jungle” swaggers, before “Stillborn” as ever concludes things. There’s no encore. A man as steeped in music as Wylde doesn’t realise he’s a rock star.

Whether he thinks it or not, Wylde is a star in every sense. He is also a wonderful guitarist, but whereas perhaps in the past he has wanted to prove it in every song, tonight is just a run-through of some of the finest songs in his very fine career. He plays when wants to, and he plays when he needs to – his solo is fantastic – but what this show amounts to is a confirmation of what occasionally gets forgotten. Zakk Wylde is more than just a former guitarist to “the boss,” all-round nice guy, and friend to the stars: he fronts a brilliant heavy metal band.