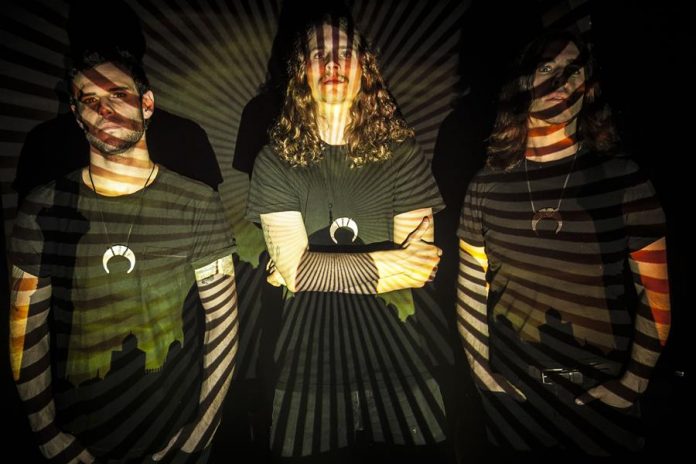 Blaak Heat have unleashed another mammoth track from their forthcoming ‘Shifting Mirrors’ album. Premiered on Terrorizer, you can listen to ‘Black Hawk’HERE.

Thomas Bellier, ex-Spindrift and Blaak Heat main-man, said the song “stems from a reflection on Gore Vidal’s criticism of US imperialism, from the point of view of someone who grew up in Europe and later moved to the US. It is one of the heavier songs on the record, which seems appropriate for tackling such a sombre issue. Black Hawk still features a number of odd timings and interesting breaks, which play a big part in Blaak Heat’s sound. I enjoy writing songs that seem weird and scattered on paper but somehow end up flowing.”

Like an Anatolian fever dream, Blaak Heat engulfs your mind in images of mystic castle mirages, slamming body and soul into an ocean of reverb fuzz. Blaak Heat’s “Mojave soundtracks” rest upon a rich history of musical tradition, drawing from the Middle East as naturally as from California’s deserts and beaches, with one foot still firmly rooted in the streets of Paris. The end-result is a timeless, vivid blend of thundering psychedelic rock and Arabian tonalities, an altar to heavy riffage, mind expansion, and social insurgencies.
Blaak Heat are an avant-garde Parisian-American psych/stoner rock trio, now signed to esteemed and unorthodox leftfield label SVART Records (Oranssi Pazuzu, Beastmilk, Opium Warlords). Formed in Paris by guitarist/singer Thomas Bellier (ex-Spindrift) in 2008, Blaak Heat relocated to Los Angeles in 2012 with drummer Mike Amster and bassist Henry Evans (formerly of Spindrift, also). Dropping the former name of Blaak Heat Shujaa, they became more primal, more indigenous and expanded the Eastern influence by incoorperating more traditional instruments and using percussionist Nelson Bragg (The Brian Wilson Group) to embellish the developing sound.
‘Shifting Mirrors’ is an album that is as intriguing as it is perilously unrelenting. By exploring a range of tonalities, tempos, and traditional soundscapes, Blaak Heat are able to traverse a number of musical territories. The lead track from the album ‘Sword of Hakim’ demonstrates the best of the bands unruly, bludgeoning guitar tone, whilst also creating a technically composite and solid rhythmic approach, which brutally rolls out, leaving the listener feeling transcended.
‘Shifting Mirrors’ calls to mind the sounds of bands such as Sleep, but it is conversely evident that the influences don’t end here as Bellier clearly takes inspiration from the likes of Amon Duul II, Magma, John Zorn, Turkish pop and surf rock by crafting structures that tend to lean more into the pysch realm, which still holds its metal influences proudly on its sleeve. Also buried into this, but not deep enough to be fully submerged, is the under rooted eastern influence of arrangements; track ‘Mola Mamad Djan’ is itself a traditional Afghan folk song, reworked into something altogether more sinister.
The band enlisted the help of Grammy Award-winning Matt Hyde (Deftones, Slayer) to produce the material that makes up this perilous and fervent third album, whilst Bellier himself co-produced. An established producer in his own right, he used his knowledge from various degrees of involvement on records by Deftones, Soulfly, Danzig, Behemoth and more to formulate an ambitious and innovative record with Hyde at the helm.
Discussing the nature of the album’s sound Bellier said: “We took our favorite Middle Eastern sounds, and reinterpreted them through the prism of our cultural baggage – weird European psychedelia, a healthy dose of vintage hard rock, experimental jazz… With Matt [Hyde], we were able to mix loud fuzz guitar tones along with traditional acoustic instruments, such as the oud and the kanun.”
Blending components of progressive rock, psych, metal, and elements of traditional Arabic instrumentation, ‘Shifting Mirrors’ is the album to transcend Blaak Heat into a further field of avant garde metal/psych rock – continuing to prove their escalation with a further comprehension and awareness of their surroundings. Succumb to the mystic castle mirages; fall into the relentlessly merciless sound of Blaak Heat.