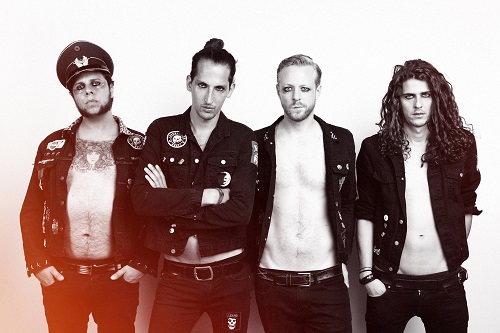 Swiss glamsters want a snog. In fact, they appear to want action and Lord knows what they’d put their lips around given the chance!

Switzerland is all cuckoo clocks and Toblerone, right? Errr not as far as Bitch Queens are concerned.

A couple of weeks ago an email came to MVM towers, very politely asking us to check out the new album by Bitch Queens and would we like to do a feature on the band.

One listen to the single “Give Me A Kiss” convinced us that yes, most certainly we would.

This is loud, its obnoxious, its filthy, its snotty – and that’s before the first chorus. Or put it another way, there’s two sorts of glam bands, so if Poison were the type of band that, in the early 1990s, you could play to your mum. Bitch Queens are the sort that would come around your house, force their way in, raid your fridge and leave you needing a check up at the clinic afterwards….

The band themselves told us this: “A high-energy live show, in-your-face riffs and a “fuck you” attitude—any questions!?

“OK … the Bitch Queens sound isn’t just plain 1-2-3-4 Punk Rock. Next to the straight beats and three-chord verses there’s plenty of room for some finesse.”  Here you’ll find a ton of influences on display: It’s a street fight with the Stooges and the Backyard Babies, while next door the Dead Boys are drinking beer with Turbonegro.”

And that was just foreplay.

Mel Quitt (Vox/Guitar), Harry Darling (Drums/Vox), Danny Schönenberger (Guitar)and Marcel Colomb (Bass /Vox) have been on the road since 2008. They’ve proven themselves in countless shows and a bunch of tours through Europe – playing with class acts like The Bellrays (US), The Datsuns (NZ), Dollhouse (SWE), The Turbo AC’s (US), The Lombego Surfers (CH), Bloodlights (NOR), Trashmonkeys (D). With Mascara and glitter oozing through their veins, there may be no other Swiss formation that can kick more ass on stage or throw a better after party than the Bitch Queens.

Look if you remember the heady days of Backyard Babies Total 13 record with affection – and if you were there that night in October 1998 when Dregen and his mates damn near destroyed JB’s venue in Dudley you probably do (my 23rd birthday – feeling old Ed) there is much to enjoy.

A full review will be on the week after next

The video contains what might be termed as “adult themes” so be warned.