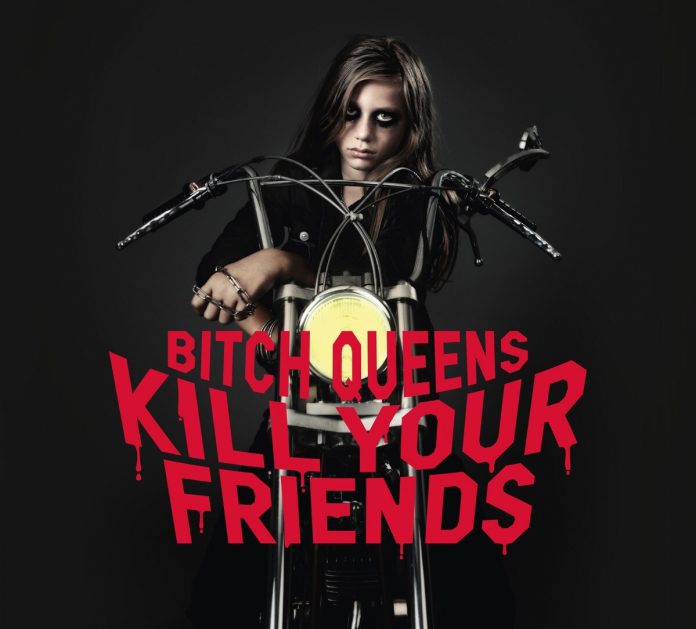 When this album arrived in our inbox at MVM towers it did so with a whole host of press material.

One of the things in the online folder was the Bitch Queens gig rider – that is to say the list of things that the band asks for from venues and promoters before they will play.

Most of it is quite sensible. vegetarian meals and so forth, but one of their demands, tucked away right at the bottom, is a picture of Iggy Pop must be in the dressing room before they will go on.

And that, if we might be so bold, is rock n roll right there…..

The promo pictures that came alongside tell you all you need to know really. The band, in various states of dishevelment in a bathroom cubicle. The inference being these boys know how to party. Hard.

Musically? ….well musically, if Poison and Warrant were the type of glam rock bands that your mum might just like, Bitch Queens are the sort that would only bother with your mum after they finished with your sister….and glassed your dad. This is what Mötley Crüe would sound like if they truly didn’t give a shit.

There’s no foreplay or teasing here, the record opens with the title track. A glammed up slammer that asks “would you kill your friends if I asked you to?” The single “Gimme A Kiss” follows, with it’s tales of girls with “loose mouths and tight chastity belts.”

Lyrically it’s x rated stuff. The boogie attack of “That Girl” urges caution when creeping up on a woman from behind as “she’s got a can of mace” and to be honest, it’s far from clear whether tongues are in cheeks here not.

Bitch Queens proudly where their influences on the studded jackets. Taking as a starting point the sound of early Hellacopters, mid-period Backyard Babies and Ginger Wildheart’s best solo stuff, this is riotous way to spend 40 minutes.

Oddly for such a hedonistic record, “Kill Your Friends” at it’s best when it takes it’s foot of the pedal ever so slightly “Again, Again, Again” and “Get Out Of My Way” change up the sonic palette a touch and the album benefits.

Largely, though, this is a record not to take too seriously – it’s got a track on called “Lick It (Like You Like It)”, let’s be honest, this isn’t going to rival Bob Dylan in the po-faced stakes is it? – and the absolute ebullience of songs like “Joan Is A Creep” and closing tune “Bullseye Baby” sees it through.