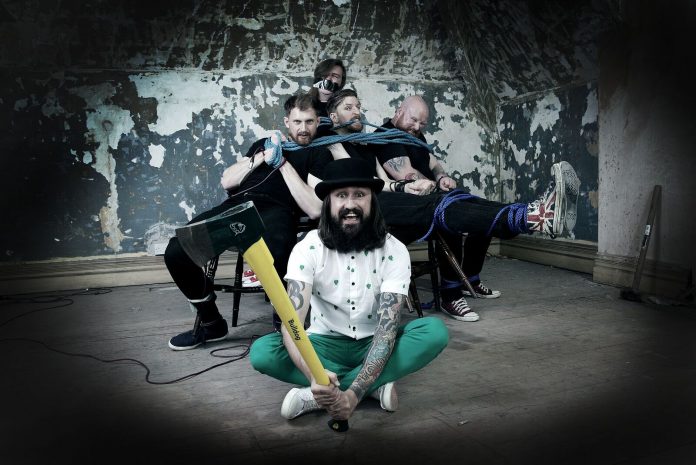 Hear the song alongside a life on the road video here:

“I really have no idea if the term ‘BALLOON HEAD’ is one used anywhere else in the world apart from where I’m from. Maybe it is, I don’t know. If you’re a balloon head, then as far as I’m concerned, you’re the sort of person with nothing much in the way of being nice, being tolerant or being open minded, to offer. Or actually having much going on upstairs full stop. The song is a stab at racists, ignorant people – c***s basically. I can’t stand c***s, I’ve no time for it, be nice or fuck off. That, in a round about way, is what Billy Balloon head is all about – if you’re gonna be a twat, fuck off and be a twat somewhere else, on your own, at the bottom of the sea preferably.”– Baz Mills

Led by the charismatic frontman Baz Mills, Massive Wagons forthcoming album “Full Nelson” showcases the evolution of the band’s song writing both sonically ad lyrically from previous album “Welcome To The World”. From the rock driven opener “Under No Illusion” to the bluesy feel of “Sunshine Smile”, from the slower, passionate and heart-felt “Northern Boy” to the heavier “Robot (Trust In Me)” produced by Mike Exeter (Black Sabbath and Judas Priest), this album will take the listener on a genuine rock journey.

Off the back of an incredible live performance at the legendary Download Festival in 2018, Massive Wagons will keep hitting the road throughout 2018 with multiple headline shows, more festival appearances – including Boomtown and Steel House – and a sold out special guest show with Blackberry Smoke, with more to follow.