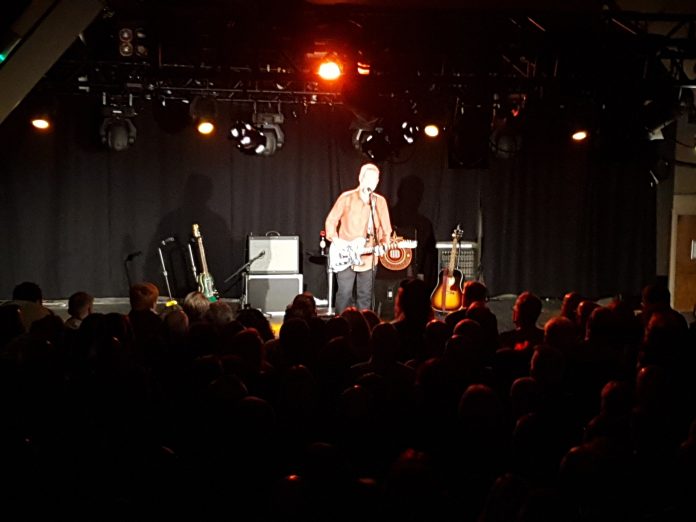 When Billy Bragg says – as he often does – “lets face it, no one has come here to hear me sing”, it is more than just a neat joke.

He is, I would argue, the greatest singer/songwriter this Island has ever produced, able to reinvent himself at will and sustaining a career for almost 40 years as a solo artist in the process, but yes, it is about more than mere “songs”.

Sticking strictly to them to start with tonight is the third night of the three he’s playing in Brum. In common with his new touring model (“partly to reduce my carbon footprint, and partly cos I am an old geezer, I’ll be honest”), he now does a kind of residency, three nights in a city, three different sets. Tonight, as he dubs it himself, is from “the soul singer Billy Bragg era”, which means songs from the mid-period, so much of the firebrand stuff was parked in favour of albums about breakups, children….and politics of course.

He starts with one that was still in the “current” set that he played two nights back, “Sexuality” has – like so many here – a staggering relevance to today, and even the slightly changed lyrics, possibly in the wake of the metoo movement, can’t disguise it.

Indeed, perhaps because I have heard these songs so much over the years (I have seen Bragg countless times and he often plays these tunes) it is incredible really how they have stood up. “The Price I Pay”, over 30 years old, a gorgeous “Little Time Bomb”, “Must I Paint You A Picture” and “Valentines Day Is Over” are all greeted like the old friends they are, to most here.

And then, there’s the other facet of Bragg. The political side. Which is where the “no one came to her me sing” thing comes from, and if there is an element, perhaps of preaching to the converted about “Thatcherites” and the like (let’s be honest about this, I doubt I am the only member of The Labour Party here) then where Bragg really does inspire – and that’s the right word – is when he talks about his concepts of accountability and empathy. I defy anyone, really, to listen to him talk and not look at things differently.

That he does this around some truly beautiful, tender songs like “Tank Park Salute” (and there’s no one here who hasn’t lost a parent who isn’t thinking of them while it plays……) or “The Space Race Is Over” (tonight dedicated to David Merritt, the father of the tragically murdered Jack. Mr. Merritt had been at the Cambridge third night the day before his son was killed) is a mark of truly wonderful songwriting.

Then there’s the firebrand stuff. “Accident Waiting To Happen” and “Waiting For The Great Leap Forwards” – still fists up, still wonderful, and the last one (“the thing about these albums is, there’s no banger to finish on, so I’ve borrowed one from the early work”) a cover of “There Is Power In A Union” is apt, because in this room, in this gathering, it feels like there is.

Earlier in the day, Bragg had played a gig at a picket line at Birmingham University. The chap I am watching this with tonight. One of the strikers had said to him, “Thanks’ for coming Billy.” His reply: “Mate, I am Billy Bragg, its my job.”

It kind of is, I suppose, but as ever he’s being disingenuous. His job is to entertain, inspire, empower – and sing some of the best songs ever made by an Englishman in the process.

Even then he wouldn’t agree. He’d just say he was working for Woody Guthrie like he always does. The converted, though. We know the truth.