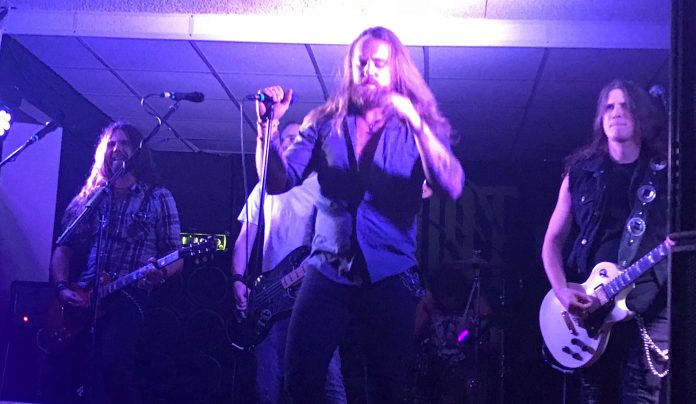 You can’t take it too seriously, really. Halfway through At The Sun’s set tonight, the smoke machine goes off. Either that or someone’s vaping. If that’s all a bit Spinal Tap (and the change of location for the Iron Road means the new venue is the sort of place where you might usually see a golden wedding at the weekend rather than Ricky Warwick and Damon Johnson who were here last night) then one thing you can’t quibble about is the quality of At The Sun’s set. Afforded longer here than usual, there’s a southern rock air about “Preacher” that recalls the Black Crowes, “Only A Fool” is like early Rival Sons (before they went shit, for clarity). ATT have a superb way about them too. Clearly loving what they do, there’s a real sense that they’d be here watching a band like them tonight if they weren’t playing. “This one’s about sex. Does anyone remember sex? No, me nether” offers singer Harry before “Walk On Over” – which is approximately filthy. With a new album coming out next year they take the chance to try some new ones. “Lay It On Me”, is given its solo for the first time, while “Bite Your Tongue” is a swaggering thing and forthcoming single “Raise Your Glass” will come alive in bigger settings than here. At The Sun have something. And it will shine brightly. 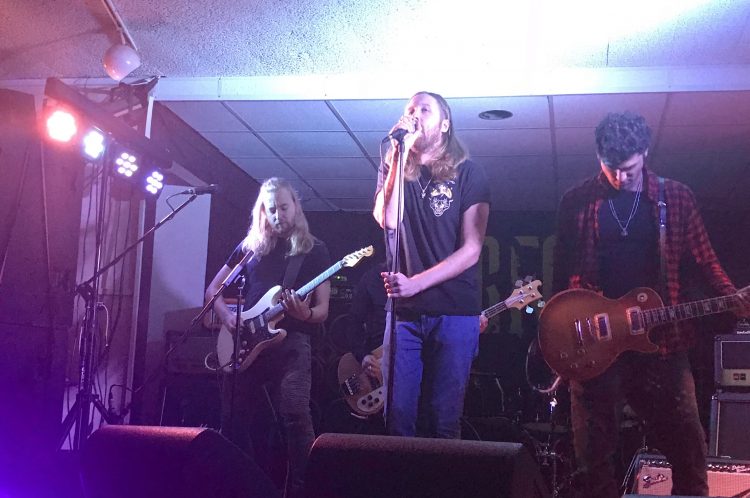 There’s a maxim I like to live by: it’s not a lie if you believe it’s true (ok, I stole it from Seinfeld but it serves me well) and I wonder if Bigfoot’s new singer Sean Seabrook has told himself he’s at Wembley tonight before he roars: “good evening Pershore lets see what you’ve got….”

Seabrook is superb. An upgrade in truth. He’s larger than life, and he’s a rock star. They told him to come and in his mind, he’s already there. And, like I say, it’s not a lie if you believe it’s true.

But then, Bigfoot in general are excellent, they really are. Two phenomenal guitarists, songs that hark back to the days when bands like Skid Row ruled the world, but with a modern twist.

The only things that are missing – in brutal honesty – are an atmosphere and a crowd.

This presents a problem, because if the good times were rolling, then the likes of “Eat Your Words” would rock. “Karma” – arguably their best – needs energy to feed off, and they have to create their own.

The crazy thing is that another night, “Freak Show” and “I Dare You” would have them bouncing off the walls. Here? Nah. Maybe it’s the venue, maybe it’s the Thursday night thing, but it ain’t happening.

“The Fear” ends the main set, and because they are rock stars, there’s an encore. In reality, however good six stringers Sam and Mick are, a gig with this little momentum probably didn’t need a solo, but it gets one by way of Hendrix. It also gets oldie “Blame It On The Dog” and current single “Uninvited”.

Seabrook tells us we’ve been fabulous. We’re in fantasy world again. We haven’t, we’ve been moribund, but Bigfoot were brilliant. Better than they had any right to be.

It’s a mighty long way down rock n roll, as someone once said, from a Worcestershire village to the Hollywood bowl (or something), but there’s no reason to suppose that Bigfoot aren’t on the up. This gig may well just be an amusing anecdote in their biography at the end of their storied career.