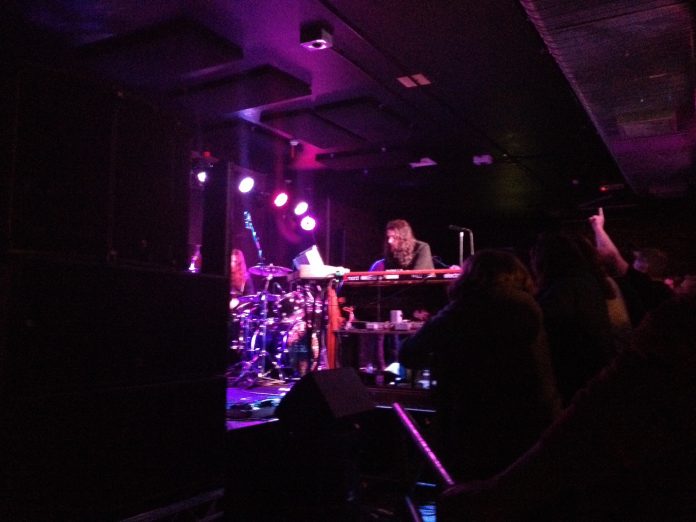 Damon Fox and his merry band of musical mavericks stop off in the Black Country, and they bring what might just be your new favourite band with them….

Jolly from New York City are a damn fine band. They proved this during their stint supporting Riverside getting on for two years ago, when if memory serves they’d just lost their gear in the floods that engulfed their homes. They aren’t aptly named, as there is a miserable heart here, but with their sparing use of Joe Reily’s keyboard dovetailing with Anadale’s guitar and vocals superbly, Jolly are a dark joy. “Dust Nation Weep” gives vent to their heavier side, beginning as it does with a mighty opening chord, there is even a touch of Dream Theater about Jolly and MVM can offer no higher praise.

Oh Canada, we’ll forgive you Alanis Morisette if you keep giving us great music. The land of Rush, Monster Truck, and a million others also has Bend Sinister. The band halls from Vancouver but look like they belong in a commune in the Rockies. Singer Daniel Moxon is clad in a lumberjack shirt with bandana to match and bass player Matt Rhode appears to be sporting a Racoon on his head, and the music? Well the music is incredible. Moxon’s piano and organ swirls, Rhode and Jason Dana bring a thumping rhythm section and Joseph Blood adds his guitar patterns over the top. No one has any idea what Moxon is wailing about but that’s not the point, rather more pertinent is that this is like Elton John gone prog rock, particularly on new track “Things Will Get Better.” Elsewhere you almost expect them to break into “Gimmie Some Lovin'” at any moment (in fact the on.y cover the play is Supertramp’s “Logical Song”). “Black Magic Woman” weaves a twisted spell and Rhode plays the track atop the speaker stack, and by the time they’ve played “Best Of You” it’s clear that something special has occurred. If you think anything after 1973 is all musical window dressing then ladies and gentlemen, Bend Sinister could be your new favourite band.

As entrances go it’s a belter. The theme from Star Wars blares out for ages, the lights go on and there, standing in a huge top hat, behind a bigger bank of keyboards, looking like a cross between Rick Wakeman and Alice Cooper, is Damon Fox. The man behind the fantastic Bigelf.

Simply put the band are one of the most innovative on the planet right now. To paraphrase Billy Bragg, trying to pin down their sound is like nailing water to a wall. Listen to the incredible array sounds on the trio of opening tracks, “The Evil Powers Of Rock N Roll,” Madhatter” and “Painkillers.” At some point in the songs just about everything that’s ever been good about rock music is thrown at the sonic wall to see what sticks and the band is certainly heavier on stage than on their recorded output suggests.

Speaking of which, Bigelf are here because they have a new record out. “Into The Maelstrom” and it’s brilliant chaos is represented for the first time by “Hypersleep,” it’s synths screech as the band stretch out superbly.

“…..Maelstrom” had former Dream Theater drummer Mike Portnoy performing, but for this jaunt, Fox’s son Baron (“he’s got the face of a serial killer, his mum is so proud,” says Damon in the band intros) is behind the kit and his work is to the fore on “Edge Of Oblivion” with it’s nihilistic message hidden behind a metal bluster. And mellotron. This is Bigelf after all.

Fox Jnr is not the only special guest tonight, John Wesley adds his guitar to the mix, and the enormous “Money, It’s Pure Evil” benefits from the former Fish sidekick and Porcupine Tree touring member’s prodigious skills.

The set ends with “Counting Sheep” an epic piece of music that appears to be at least three different songs all at once. They return for “Incredible Time Machine,” which sees Fox don a pair of Roy Woodesque coloured shades as the music turns wonderfully psychedelic.

Doing what Bigelf make look so easy would be beyond other bands. Tonight there’s been dashes of Queen. A bit of flirting with the Beatles, a heavy dose of metal and plenty songs that sound like self-contained plays. And only ever one Bigelf. A band that breaks the mould, puts it together and then smashes it once more.