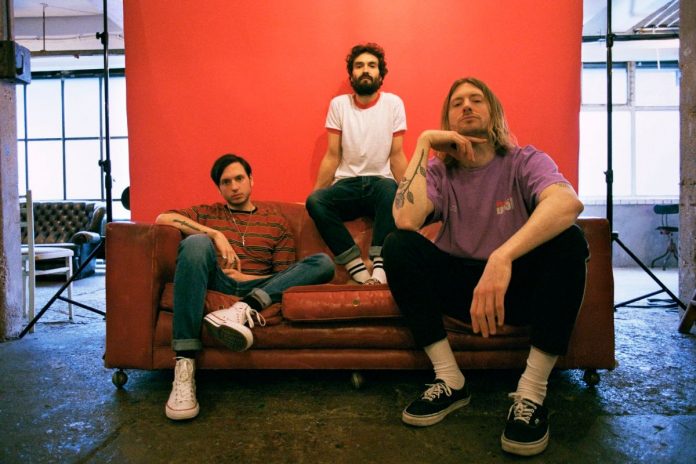 Dinosaur Pile-Up have released their brand new single ‘Round The Bend’ ahead of the forthcoming fourth album Celebrity Mansions out this Friday (June 7th) via Parlophone Records.

‘Round The Bend’ is an anthemic punk rock banger from Dinosaur Pile-Up, with a monumentally sized chorus laced with raw emotion.

The song premiered last night on the Radio 1 Rock Show. It follows the great support from the station for the previous singles ‘Back Foot’ and ‘Thrash Metal Cassette‘, with Annie Mac, Jordan North, Jack Saunders and Dan P Carter all huge fans of the band at the station. The songs also featured on the playlists of both Radio X and Kerrang Radio.

The album is also receiving strong early critical praise; the band feature on the cover of the latest issue of Upset Magazine and Celebrity Mansions has been hailed as one of Rock Sound’s Top 10 albums of the month. The singles have also received strong support from the likes of NME, DIY, Kerrang, The Independent, Dork and many more.

The band are set to complete a live in-store UK tour to celebrate the release of Celebrity Mansions. Fresh from playing arenas in Europe with Muse last week, Dinosaur Pile-Up are returning to play tiny intimate venues across the UK.

Kicking off on album release day at Leeds’ Belgrave Music Hall, the band will play a further four live in-stores across the country including Bristol, London, Kingston and Brighton. Shows either take place in neighbouring venues to local record shops, in conjunction with specific retailers or in the record stores themselves. Tickets can be purchased as a package along with album pre-orders here.

Following the in-store dates Dinosaur Pile-Up will play Download Festival before embarking on a huge run across the US with Shinedown throughout June and July.

Dinosaur Pile-Up are set to ruffle feathers and break the mould as they release their most punk rock and in-your-face material to date on their brand new major label deal. WithCelebrity Mansions they’re set to prove how vital and pivotal British rock music is today.