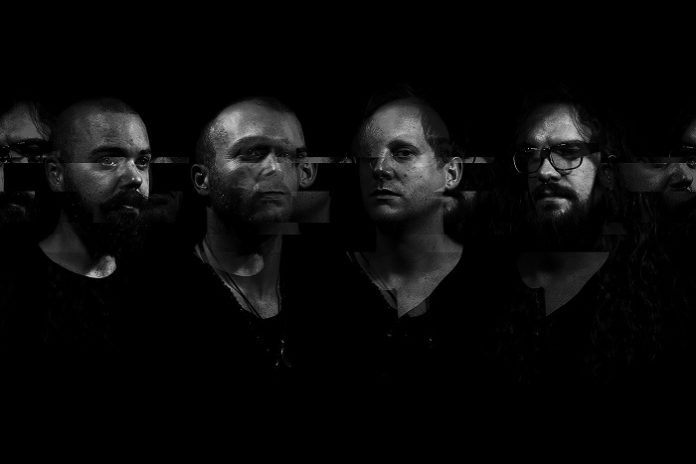 Last week we gave you the new clip, here’s the Behind The Scenes

“The inception of our band was a written manifesto, the contents of which essentially boiled down to one word: intensity,” asserts Andrei, guitarist of London quartet, THE EVER LIVING. “We realised we wanted to be a heavy band, but not necessarily a “metal” band in the traditional sense and we have evolved deliberately with that in mind,” continues bandmate, vocalist and keyboardist Chris; “We use brass, strings and piano; open droning guitars rather than palm-muted chugs, and avoid over-reliance on double kickdrum.” THE EVER LIVING’s self titled debut EP is most certainly expansive, its five tracks constructed around tidal waves of thick guitars, atmospheric instrumentation and vocals that roar from the murky depths.

Ahead of it’s release in April, the quartet have unveiled the striking video for single ‘Separated At Death’. Here Chris gives an account of how the video came into being.

When picking this track for our first video, it was a tough call between this and ‘Stung by Something’, but I had the idea for the concept a while back, which made the decision easier. This track is the first we wrote and is probably the most accessible. It also came out really well in the studio.

The video features ‘The Statue of Love’ by Georgian artist Tamara Kvesitadze. It’s a moving sculpture based on the 1937 novel ‘Ali and Nino’ by Azerbaijani author Kurban Said and depicts a love story between a Muslim boy and a Georgian princess. I saw an article online about the statue sometime last year and I was struck by the sheer size of the figures. It is a very well-engineered moving sculpture that tells a story, I liked the performance element to it and it fits perfectly with the theme of the lyrics. I’m really not a fan of performance videos unless they are executed in an interesting way so we weren’t going to go there. But I thought that if you could capture the performance of the statue without any tricks or effects and if you didn’t have any buildings or people in the shot, it would give an otherworldly feel to it. If you didn’t know it was a huge moving sculpture you may think it was computer-generated or a small model.  I think we achieved that.

The director is a friend of mine is from Georgia. She runs an art gallery out there so has a lot of contacts. Through her, we hired a local cameraman, Irakli Akhalkatsi, who I then briefed using existing Images to send him particular angles and coverage I wanted. I also edited a mood video taking existing footage and cutting it to the track, to give him an idea of how I wanted it look and feel. He spent an evening and a morning at the statue, sent me back the footage when he was finished, which only required a quick edit by me to wrap up.

The video was supposed to only feature night shots originally because I didn’t think daylight would fit the tone, but I asked Irakli if he could also shoot during the day too just in case. Luckily, there was some ominous cloud coverage, which gives great contrast to the image, adding to the story and breaking up the piece in the middle. The rain was of course unplanned and I think Irakli was a bit nervous about telling me, but it looks great and makes for a more dramatic piece.

I was quite relieved when I saw the footage. I had no idea how it was going to turn out as I hadn’t been to the location myself. I didn’t know whether or not you needed permission to film there or if the statue was still working. I was also relying on someone who I’d never met before to get what I wanted. Irakli had to travel 5 hours from Tbilisi and stay overnight so we only really had one chance to get it. It could have gone horribly wrong so for the fact it didn’t, I am very grateful. It is pretty amazing to think how easy it was to make when you consider that we worked remotely and never met!