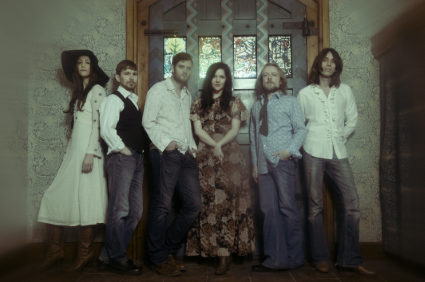 Unbelievably, it’s almost 50 years since Fairport Convention and their followers – Steeleye Span, Trees, Dando Shaft, Mellow Candle and others – fashioned British folk-rock. Kent-based sextet Galley Beggar – who take their name from a mischievous spirit in English folklore – describe their mission as ‘to imagine the next phase of English folk-rock’ on their third album, Silence & Tears. “We’ve always loved English folk, but when we formed in 2009 it felt like nothing much was happening to carry the style forward,” says guitarist Mat Fowler, “so we thought, we love listening to folk-rock and we love playing it – why not try to write something in that vein?”

The results can be heard on their earlier albums, Reformation House andGalley Beggar, and now on Silence & Tears. “Our first record was very folky,” reflects Mat, “but since then we’ve moved towards a more electric rock feel.” Indeed, the eight tracks on the new album span traditional song, Gothic balladry and peculiarly British acid rock, the mood alternately fragile and robust, with sweet vocal harmonies (led by Maria O’Donnell), lyrical guitar playing from Mat and his cohort David Ellis, and added texture from the violin of Celine Marshall (calling to mind Mr. Fox’s Carolanne Pegg), all anchored by Bill Lynn’s steady bass and Paul Dadswell’s deft drumming. The material spans reworkings of the ancient classics Geordie and Jack Orion, brooding ballads like Adam & Eve and the otherworldy Empty Sky, and the intense 9-minute epic Pay My Body Home, which triumphantly recalls folk-rock’s early 70s glory days.

Silence & Tears may echo centuries of folk tradition, but its crisp, punchy sound is resolutely modern, despite calling on retro flourishes such as phasing, wah-wah and backwards guitar. Much of that is down to the fact that it was recorded at the profoundly analogue Toe Rag studios, where White Stripes, Tame Impala, the Zutons and many others have also worked with renowned producer-engineer Liam Watson. “We made our first two albums ourselves,” says Mat, “so this was the first time someone else has produced us. Recording at Toe Rag was just wonderful – to see all that incredible gear at work, and to have a tangible recording experience rather than staring at a screen, was amazing. And watching Liam at work is mesmerising – the sounds he gets onto tape are better than they are in real life!”

In an era when bands such as Trembling Bells, Circulus and Wolf People have brought folk-rock to the fore again, the hypnotic interplay and inspired jamming on Silence & Tears is sure to find an enthusiastic audience. “We’ve already got a few festivals lined up this summer, including Leigh Folk Festival and Wessex Festival, and several other shows are still being arranged,” says Mat. “It’s an honour to be compared to other folk-rock bands – but we like to think we’ve got something of our own to offer too.”