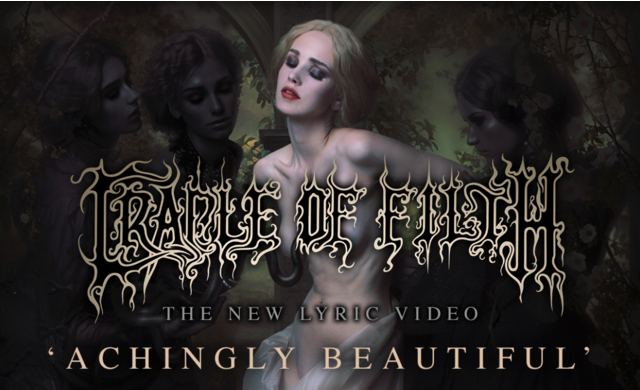 The song comes off the band’s upcoming album Cryptoriana – The Seductiveness Of Decay.

Commented Dani Filth: “Influenced by the stories of E.F Benson, Sir Arthur Conan Doyle, H.Rider Haggard, Oscar Wilde, Arthur Machen and Algernon Blackwood to shame but a few, this song concerns itself with a spectral guest at a great masked ball who, (deeply embedded in his cruel libertine nature, attends merely for merciless, seductive sport), but instead discovers the woman of his dreams and both bewitching the other, finds in her his dark, immortal equal.

I love this song as it has a very old skool CRADLE vibe for me, both lyrically and musically, and reeking hideously of the Vampiric, the dropdown section in the middle is pure ‘A Gothic Romance’.”

The album is also available for pre-order: http://nblast.de/CoFCryptoriana
Get ‘Heartbreak And Seance‘ and ‘You Will Know The Lion By His Claw‘ as instant grat tracks when you buy the album digitally.

Also below is the stunning cover artwork by Artūrs Bērziņš. Bērziņš is the mastermind behind the new record’s artwork, photography and videography – best known for his defiant neo-symbolism raster graphics and oil paintings; postmodern interpretations of classic myths. He has been proclaimed as a “sacred monster of Latvian postmodernism”.