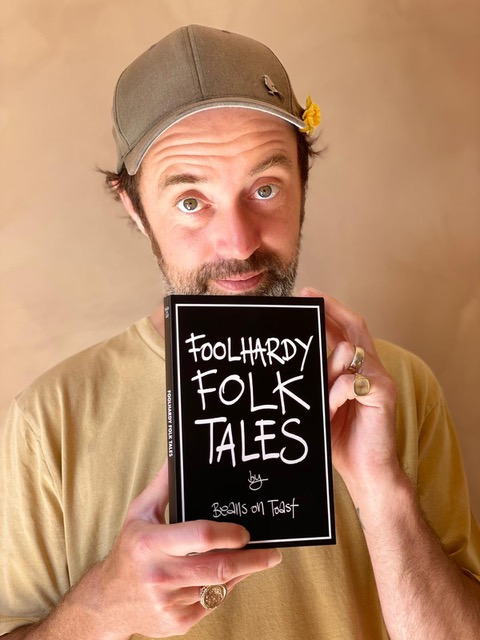 Foolhardy, fun-loving folk musician and longstanding festival fixture – BEANS ON TOAST – is pleased to announce the arrival of his second book: ‘Foolhardy Folk Tales’.
Released this Summer, ‘Foolhardy Folk Tales’ will follow in the footsteps of his warmly received debut outing, 2018’s ‘Drunk Folk Stories’, as the singer shares 10 more capers from a life less ordinary. A mix of memoirs, mischief and moral tales from a modern-day folk legend, the new book finds Beans venturing back into the past to “try and throw up some fun stories, lessons learned, or bridges burned”.
An artist and author with a reputation for the prolific, like his acclaimed 2020 albums: ‘Knee Deep in Nostalgia’ and ‘The Unforeseeable Future’, his upcoming book ‘Foolhardy Folk Tales’ was penned over the previous 18 months whilst the world, and his touring lifestyle, was put on hold. Written during the pandemic, but with the guarantee it has nothing to do with it, ‘Foolhardy Folk Tales’ instead presents a collection of stories about art, money, drugs and true love.
Turning 40 last year, the book finds the cult singer looking back to extract entertaining excerpts from throughout his life and career to date. From notions of escaping small-town suburbia in Braintree to living the American dream in Texas, getting creative with blank canvases to top tips on the art of the blag, fantastical tales of robbing Tesco (sort-of) to philanthropic deeds for the Strummerville charity; join Beans on a whirlwind tour through some of the most heartwarmingly believable and outrageously unbelievable parables that have defined this artist’s unique journey.
Assembling life lessons from a misspent youth up to a misspent middle-age, the book promises to bring readers right up to the here and now, with Beans shedding light on his new life by the coast in Kent in its final chapter.
Reflecting on why 2021 was the right time for a sequel to ‘Drunk Folk Stories’, Beans says:
“I really surprised myself by writing the first book, but it was a process I enjoyed and by all accounts, it went down way better than I could have imagined, so I thought I’d surprise myself again. I had plenty more stories to tell and in many ways the book is still being written…”
To celebrate the launch of the new book, Beans on Toast will be hosting his very own: The Foolhardy Folk Festival on 7th August at The Nottingham Arboretum. A one day festival curated by the man himself, the event will feature live music from a host of live acts including Kitty, Daisy & Lewis, Dizraeli, Dana Immanuel, Chloe Leigh, Kato, and Benjamin Ziec. As part of the event, Beans will be selling and signing copies of ‘Foolhardy Folk Tales’ ahead of its official release date. Tickets are on sale now here: https://bit.ly/33wf67K
Available in physical hard-back and audiobook editions (as narrated by Beans), ‘Foolhardy Folk Tales’ will be released by Play On Words Publishing on 10th August 2021. A foreword comes courtesy of friend and fan: Frank Turner.
All pre-ordered copies of the book will be personally signed by Beans on Toast, with purchasers also able to get priority access to tickets for the official launch party at The Hootananny in Brixton (10 August), featuring special guests Skinny Lister (who also feature in the book). Pre-order here: https://beansontoastmusic.com
A celebration of living life, making music and blagging it, Beans on Toast will release ‘Foolhardy Folk Tales’, on 10 August via Play On Words Publishing.
Singing simple songs about complicated subjects, Beans on Toast has established himself as an accomplished songwriter and an unmissable live performer. Having released an album every year since 2009, Beans went one better in 2020 with the release of two new records: ‘Knee Deep in Nostalgia’ (produced by Frank Turner) and ‘The Unforeseeable Future’. Always writing, recording and touring (when he can), expect new material, festivals, shows and more very soon…