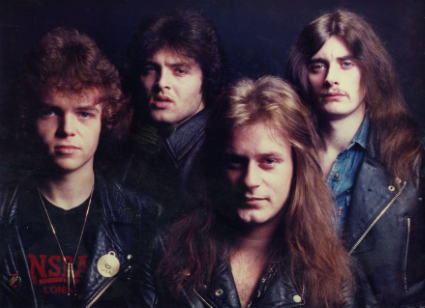 Seminal NWOBHM album to get re-release treatment next month

‘Power From The Universe’, which has been digitally re-mastered, will include four rare bonus tracks, recorded at Neat Studios in the mid-Eighties – ‘Killer Woman’, ‘Radio Thunder’, ‘Loves On Fire’ and ‘Love Sick Man’ – and comes with new liner song notes, plus extra never-been-seen-before photos, taken from those heady early days.

Battleaxe emerged from Sunderland in the late 70’s, roughly melding Motorhead, AC/DC and Judas Priest, and singing songs about playing live, driving cars, shagging birds and mediaeval warfare (which, is kinda groundbreaking in metal, right?). After starting out with the name Warrior, they morphed into Battleaxe sometime in early 1980. The band consisted of Dave King (vocals), Brian Smith (bass), Steve Hardy (guitar), and Ian Thompson (drums). After playing around the area and honing down their live chops, they entered the studio to put down their acclaimed debut studio album, ‘Burn This Town’ in 1983.

‘Power From The Universe’, a more refined and mature album, recorded with new drummer Ian McCormack, was even better received than ‘Burn This Town’, and support slots with the likes of Saxon, Anvil, Madam X, and Twisted Sister ensued.

But Battleaxe imploded in the late 80’s, before reforming with the current line-up of original members Dave King (vocals) and Brian Smith (bass), as well as Mick Percy (guitar) plus Paul Atkinson (drums) to sign to SPV to release their much welcomed and lauded third studio album, ‘Heavy Metal Sanctuary’ in February 2014.

Battleaxe’s debut album ‘Burn This Town’ was re-released in December 2013 on SPV. Metal Hammer scribe Greg Moffit stated in his March 2014 issue review that “‘Burn This Town’ is packed with denim-over-leather, meat’n’potatoes metal of the highest caliber. Even the roughshod production can’t disguise the fist-pumping glory and supreme headbangability (not sure if that’s a word – pedantic Ed)  of ‘Ready To Deliver’, ‘Dirty Rocker’ and ‘Thor – Thunder Angel’. The ultimate vindication though, stems from the fact that today there are hundreds of young bands desperately trying to sound just like this. 8/10”. Now the 30th Anniversary Edition of ‘Power From The Universe’ will, in all likelihood, be even more ecstatically received.

Find out how we receive it soon – but you know we love our NWOBHM…..