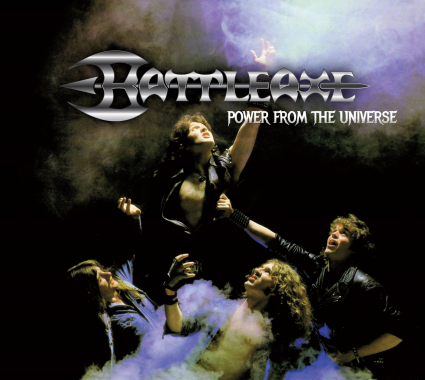 NWOBHM pioneers get the re-release treatment

We’ve all done it. Everyone reading this website simply must have sat down with their mates in the boozer and constructed a fantasy gig of line ups and bands we would love to see.

When MVM does this the names get bandied about. Thin Lizzy with Phil behind the microphone, the original Guns N Roses in 1987, Rory Gallagher. You know how it goes.

Then we have the big one. All three Iron Maiden era’s. That is to say, D’ianno, Bayley and Dickinson on the same stage. Oh and Priest and Saxon support.

Well, if we ever do that – and believe us we will one day (maybe….) – Battleaxe can be the opening act.

Storming out of the North East of England (and dammit don’t you just have to love an area that gave us The Wildhearts, The Quireboys AND Venom?) Battleaxe had already released their debut “Burn This Town” record by the time they got to “Power From The Universe.”

The line up for that record in 1984 Dave King – vocals, Brian Smith – bass Steve Hardy . guitars and Ian McCormack – drums went in the studio, apparently with the aim of creating something a little more refined and mature. When they came out with “…..Universe” under their belts, they had crafted something that is quite superb.

From the opener of “Chopper Attack” to the closing bars of “Love Sick Man” what Battleaxe achieved on their second record was to write something that captured the metal of the time absolutely perfectly.

“…..Universe” is an album that could only have been made by a British band. “Metal Rock” kicks off with a drumbeat that you half expect to be followed by the words “white man came across the sea” before actually coming on like Saxon. Even more fabulously “License To Rock” contains the lyric “not gonna grass to the law” with absolutely no shame.

There is a wonderfully innocent quality about the songs here. “Make It In America” takes four young men’s dreams of stardom and sticks them up there in great, flashing lights for everyone to see, while “Radio Woman” does likewise. In between there is the darker and more apocalyptic title track, showing the band had a serious side too.

Look, you know the drill here. “Power From The Universe” sounds like glorious mix of Judas Priest, Saxon, early Maiden and even earlier Def Leppard with a touch of Motorhead’s punky attitude thrown in.

It’s the sound of a band that genuinely thought it was going to take on the world and there is an enthusiasm about it that you just can’t fake. The band are releasing new material next year. It will be introducing to see what the no doubt more world-weary 2015 vintage write about. For now though, just enjoy this.